Why is the big city mindset so different?

There seem to be at least two major mindsets in our country. We don’t like political discussions – so this really isn’t about parties, candidates or “officials.” But more of a mental framework people have – and where they eventually settle down (like urban vs. rural).

But in the end – the actions of people (or lack thereof) do interface with government systems to a degree. And how much of that one might want – can accurately portray them as either progressive or conservative. You’re much better off being an independent thinker with zero affiliation.

Do you wonder why many big cities are “progressive?”

It’s not plainly obvious to the people that live in major cities (and around 70% of the populous lives in those major cities…) All those “big cities” (think: NYC, LA, Chicago, etc.) have always been considered “progressive” cities.

Better yet – HOW AND WHY?

You see – the same middle-class person “working” in a big city is just as affected by the so-called “laws” of this nation as a person working in a rural area.

So why are rural areas more “conservative?”

Why do these people have different beliefs and ideologies?

Some might suggest that those who thrive by themselves with minimal help from others – are typically on the conservative side. And over time, the “handlers” of society have been shoving more and more people into these big cities, creating “dependents.” In fact, making it harder and harder to be out there “in the wild.”

Wait long enough (just a few generations), and you have millions of people who know NOTHING BUT this form of progressive ideology.

Only the strongest people can “wake up” and shed the biases they’ve been conditioned by. Look around and figure it out.

Nature vs. City – A bad divorce?

It is quite possible that people living in cities are essentially “divorced” from Mother Nature (as much as their roof-top gardens and farmers’ markets tell them otherwise).

That divorce (or disconnect) may be the ROOT of the urban/progressive issue. 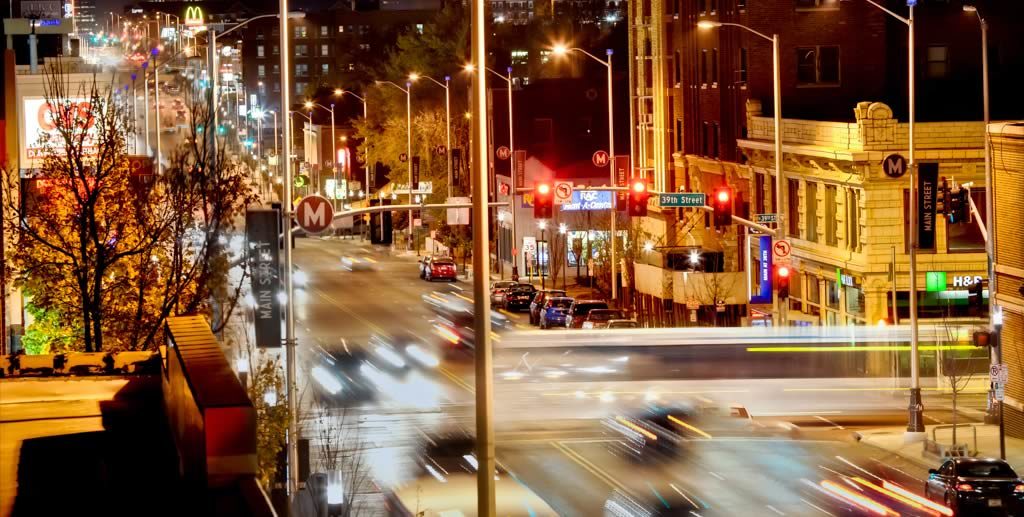 When people live in any big city, they provide ZERO sustenance for themselves. They do not sow. They do not reap. Other than monetary units.

However, they’re entirely dependent on the production OF OTHERS that they will NEVER interact with. You know, those “rural folk” that they like to make fun of while they sip $25 mojitos at a swank trendy bar.

Those “urbanites” that have been re-defining (their own) reality – pretty much live in a “conceptual” world of “always-on” conveniences, rather than a natural one.

What do they do when they’re hungry? Well, they simply go to the “store” and buy food. Therefore, “stores” and the swap of fiat money are their source of nourishment. Other people in the world are hungry? “They just need more money and more stores!” That is their reality – and it isn’t the truth.

They care not about the knowledge and wisdom that accompanies understanding that fickle mother nature – which is a true template for life on this planet.

The reason cities actually function these days is due to the frightening DEPENDENCY on others. Who do not live in the city. Ironic, eh?

Water is pumped from afar, food is shipped in, trash is conveniently hauled safely away from them, and electricity is wired in from distant plants just far enough away from the “comfort zone.” 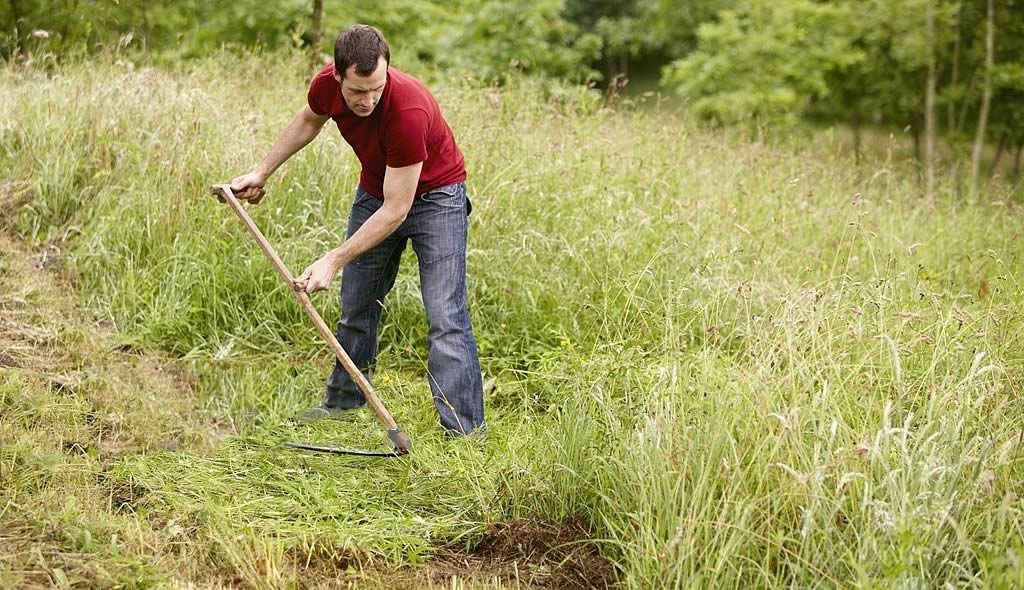 Even people that work in (provide a lifeline to) those cities – often flow in from distant lands outside that very “concrete jungle.”

You would think that someone living in the city is “self-sufficient,” based on just the social, monetary, human energy that exists – when in fact it’s like a psychiatric ward of dependent children!

And because of that fact, the “cities” themselves behave like children: Making demands, having self-centered emotions, and almost always drawing attention to themselves (especially in risky situations). They are convinced they’re mature and sophisticated when they are anything BUT.

In fact – cities contain the most provincial, bigoted, close-minded and intolerant people on Planet Earth. “The epicenter of urbanity is where the devil lives.”

Everything else is some “hick town” out in the middle of nowhere.

This famous cover of the New Yorker magazine depicts how professional urban-dwellers likely see the rest of the world: 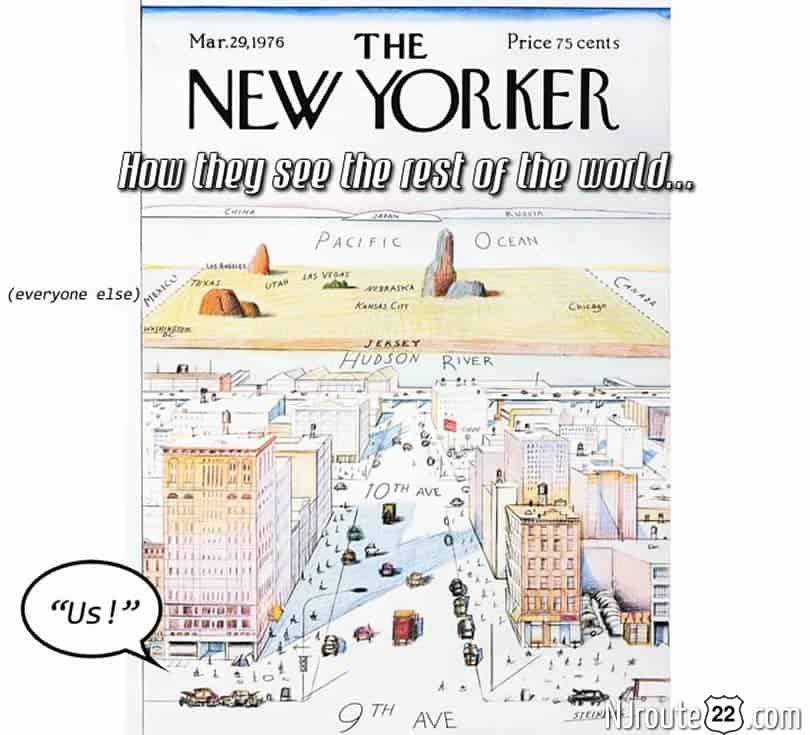 Progressive vs. Conservative views on life & and where to live

People CHOOSE to live in risk-prone areas (like near a massive body of water, or active volcano). Should they alone be responsible for their choice to live near a known risk zone? Or should “big brother” fix the problem?

Every so often, a hurricane or other natural disaster will destroy homes and displace families.

The “progressive” solution is to create bloated agencies fully staffed with employees to deal with those emergencies. They develop comprehensive plans to help “rebuild,” have insurance to replace the homes and businesses, etc.

The “conservative” method is quite different. They’d suggest using areas as we described for recreational purposes only – not permanent living. A person with common sense understands that low-lying coastal areas are prone to events like Hurricanes – and would deem them unfit for permanent residences (or at least “at your own risk.”)

The “progressive” mindset changes nothing. Does not PREVENT repeated events, and costs a boatload more to mitigate, wastes materials, energy, human labor, and pollutes the environment!

The “conservative” approach takes nature into account and would put people and businesses in places where they are FAR LESS LIKELY to suffer loss – while conserving energy, labor, and material. Yet it would still allow for enjoyment of those areas during all other times when it is possible to utilize the benefits and natural beauty of the area.

Force over others never ends well

A more concise way to say what we just said:

These two cannot exist together in harmony because it is an antagonistic system of resolution that by its very design leads to terrible conflict.

All of it is based on a misunderstanding of reality on the part of those liberal minds. One requires FORCE to IMPOSE – and the other just acceptance. One is impossible over the long-term, while the other is quite easy. It just needs widespread acceptance of logic and common sense.

The bigger question is – how do we make the country great again when the decline has had such a tremendous head-start?