Somerset County, NJ plays a major role here on NJroute22.com, with many cities calling this county home. Plus roads such as Route 22, Route 28, Route 78, Route 202, Route 206 and Route 287 all passing through. A lot going on! 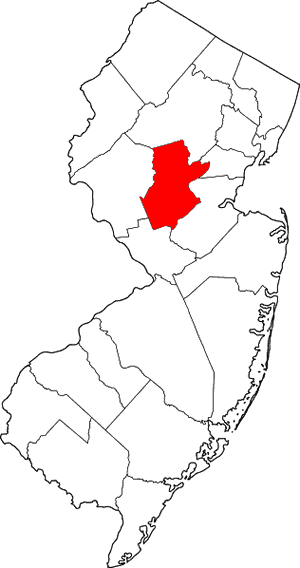 Somerset County, as of the 2000 Census, was the seventh-wealthiest county in the United States by median household income at $76,933 (third in New Jersey behind Hunterdon County at $79,888 and Morris County at $77,340), fourth in median family income at $90,655 (second in New Jersey behind Hunterdon County at $91,050) and ranked seventh by per capita income at $37,970 (highest in New Jersey). The Bureau of Economic Analysis ranked the county as having the 11th-highest per capita income of all 3,113 counties in the United States (and the highest in New Jersey) as of 2009. In 2012, 49.8 percent of Somerset County residents were college graduates, the highest percentage in the state.

Somerset County was created on May 14, 1688, from portions of Middlesex County.

Somerset County is one of America’s oldest counties and is named after the English county of Somerset. The area was first settled in 1681, in the vicinity of Bound Brook, and the county was established by charter on May 22, 1688. Most of the early residents were Dutch. General George Washington and his troops marched through the county on several occasions and slept in many of the homes located throughout the area. Somerset County also played an important part during both World War I and World War II with weapons depots and the manufacturing of the army’s woolen blankets.

In the 1960s, townships that were once exclusively agricultural were quickly transformed into suburban communities. Examples include Bridgewater Township and the Watchung Hills communities of Watchung, Green Brook, and Warren Township. This growth was aided by the development of the county’s very strong pharmaceutical and technology presence. Warren Township used to be considered “the greenest place in New Jersey.” More recently, there has been an influx of New York City commuters who use New Jersey Transit’s Raritan Valley Line and Gladstone Branch or use Interstate 78.

The high point is on Mine Mountain in Bernardsville, at approximately 860 feet (260 m) above sea level. The lowest point is just above sea level on the Raritan River at the Middlesex County line.

Somerset County parks include Lord Stirling Park (part of the Great Swamp National Wildlife Refuge), Colonial Park (with a lovely rose garden), Washington Valley Park (with biking and hiking trails), the Sourland Mountain Preserve (hiking and mountain biking trails), and the newest park in development called Raritan River Greenway (which is being developed along the Raritan River in Bridgewater Township).

The only two state routes that traverse through are Route 27 (only in Franklin) and Route 28.

The two interstates that pass through are Interstate 78 and Interstate 287.

Interstate 95 was planned to run along the Somerset Freeway from its proposed southern end in Hopewell Township, Mercer County to Franklin Township at I-287 in the 1960s. However, this was canceled in 1983.

Route 18 runs at the New Brunswick border of Somerset. 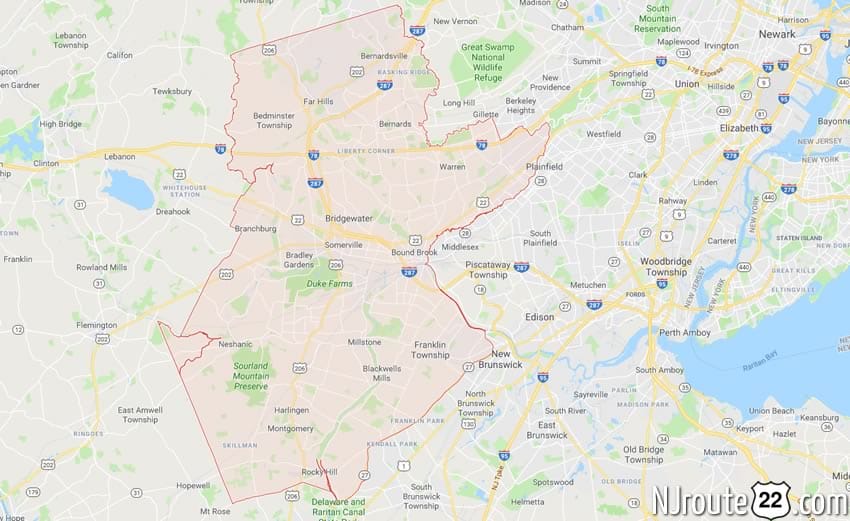