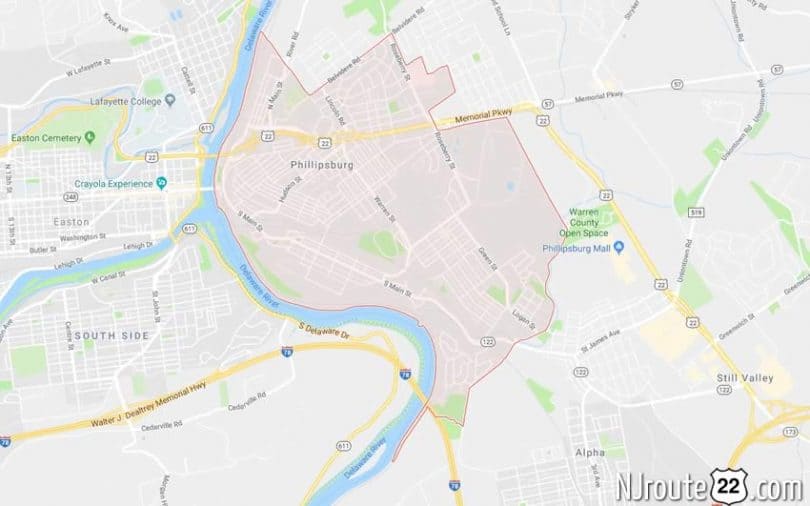 When most people I know say they’re going to “P-burg” (Phillipsburg), they don’t always mean the actual town of Phillipsburg! Most of the “big” destinations out there are located in either Greenwich Township, Pohatcong, or Lopatcong!

Whatever, right? Just a technicality, really.

Below is an “encyclopedia” entry for the town of Phillipsburg:

Phillipsburg was incorporated as a town by an act of the New Jersey Legislature on March 8, 1861, from portions of Phillipsburg Township (now Lopatcong Township). The town was named for William Phillips, an early settler of the area.

The town is located in western New Jersey, on the border of Pennsylvania, and is considered the eastern border of the region’s Lehigh Valley.

The town grew from a sleepy agricultural village (in 1824), and was transformed into a transportation hub and shipping center as the Delaware terminus of the Morris Canal (1829-1924), the first transportation infrastructure project of several, each eventually giving the community a direct connection 107 miles (172 km) to New York City. The Central Railroad of New Jersey would soon follow with a connection, but the community’s growth (and for a long while, its importance) was that it reached the canal terminals of both the Delaware Canal and the Lehigh Canal by its cross-river cable ferry system to Easton, PA. In 1853, the Lehigh Valley Railroad connected across the river with the CNJ and a passenger shortline railroad, the Belvidere Delaware Railroad, as well as the Morris Canal, all within Phillipsburg. Rapid growth followed quickly.

Phillipsburg was incorporated as a town by an act of the New Jersey Legislature on March 8, 1861, from portions of Phillipsburg Township (now Lopatcong Township). The town was named for William Phillips, an early settler of the area.

Pohatcong Mountain is a ridge, approximately 6 mi (9.7 km) long, in the Appalachian Mountains that extends from Phillipsburg northeast approximately to Washington.

The Town’s economic data (as is all of Warren County) is calculated by the US Census Bureau as part of the Allentown-Bethlehem-Easton, PA-NJ Metropolitan Statistical Area.

There were 6,044 households out of which 31.9% had children under the age of 18 living with them, 43.4% were married couples living together, 16.5% had a female householder with no husband present, and 34.7% were non-families. 29.7% of all households were made up of individuals and 13.9% had someone living alone who was 65 years of age or older. The average household size was 2.49 and the average family size was 3.08.

Phillipsburg had historically benefited from being a major transportation hub, situated at the confluence of the Delaware and Lehigh rivers. Phillipsburg served as the western terminus of the Morris Canal for approximately 100 years from the 1820s to 1920s, which connected the city by water to the industrial and consumer centers of the New York City area, with connections westward via the Lehigh Canal across the Delaware. Long gone is the era of canal shipping and many of the important freight railways that served the area have gone bankrupt or bypass the city on long distance routes.

Most of the manufacturing jobs have left Warren County’s largest city. In 1994, the New Jersey Legislature designated Phillipsburg as an Urban Enterprise Zone community. This zoning offers tax incentives and other benefits to Phillipsburg-based businesses, as well as a 3½% sales tax rate at eligible merchants, reduced from the 7% rate charged statewide.

In recent years, some businesses have begun to move into the center of the city. Rising real estate prices indicate that these legislative stimulants have been somewhat effective. Phillipsburg has been selected as a site for the New Jersey Railroad and Transportation Heritage Center (jointly with Netcong), a museum designed to help preserve and showcase the state’s transportation history.

Since 2007, New Jersey Transit has been conducting a study to determine if re-establishing a commuter rail extension of the Raritan Valley Line to Phillipsburg is economically feasible.

Phillipsburg also is home to the Phillipsburg Railroad Historians museum. They have a display railroad memorabilia inside the museum, an “N” scale diorama, two Lehigh & Hudson River cabooses (one of which is currently being restored) and a Jersey Central caboose. There is a L&HR snow flanger, Tidewater tank car, a CNJ box car owned by the Anthracite Railroads Historical Society, a 1922 Chestnut Ridge Mack railbus owned by the Lehigh Valley NRHS, a Public Service trolley owned by the North Jersey Electric Railway Historical Society, a 44-ton GE locomotive and a 25-ton GE locomotive. They operate a miniature railroad, the Centerville & Southwestern, that formerly ran in Roseland, New Jersey.

Situated at the confluence of the Delaware River and the Lehigh River, Phillipsburg has historically been a major transportation hub. From the 1820s to 1920s, was the western terminus of the Morris Canal, which connected it by water eastward to the Port of New York and New Jersey and westward via the Lehigh Canal across the Delaware River. Five major railroads converged in Phillipsburg, the Central Railroad of New Jersey (CNJ), the DL&W’s Morris and Essex Railroad, the Lehigh & Hudson River Railroad (L&HR), Lehigh Valley Railroad (LVRR), and the Pennsylvania Railroad‘s (PRR) Belvidere Delaware Railroad. The CNJ first ran in 1852. Phillipsburg Union Station served CNJ and DL&W. 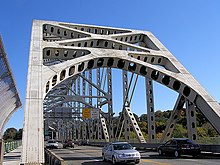 Major highways that enter Phillipsburg include U.S. Route 22 and Route 122. Interstate 78 passes through for less than a quarter-of-a-mile without any exits, but the closest interchange is in neighboring Pohatcong.

New Jersey Transit bus service is provided on the 890 and 891 routes. It is also served by a bus line down Route 57 to Washington Township.

By air, Phillipsburg is served by Lehigh Valley International Airport.

People who were born in, residents of, or otherwise closely associated with Phillipsburg include: 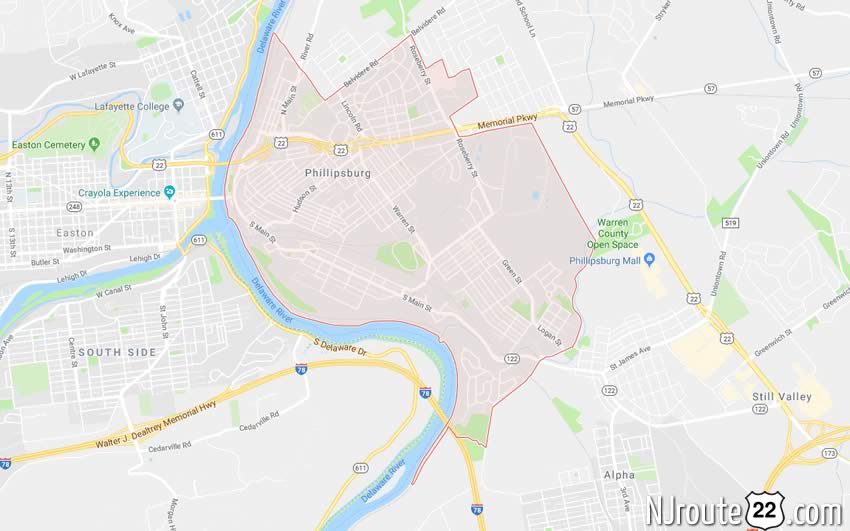