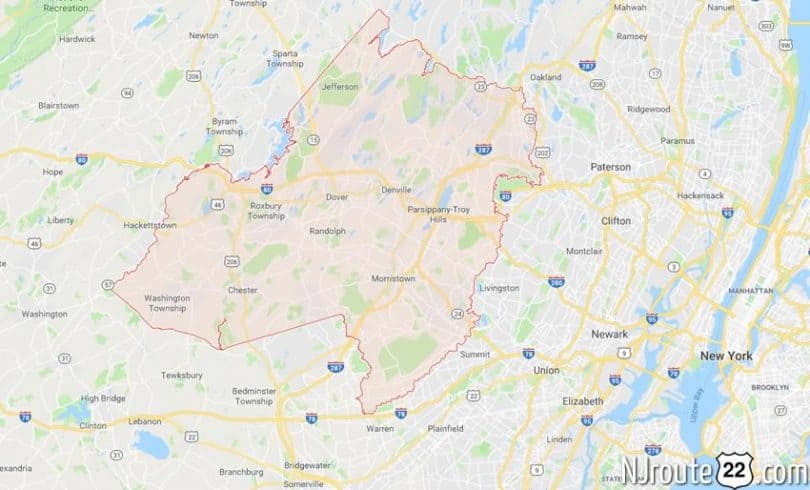 Morris County, NJ is to the north of Route 22 but still plays a viable role on NJroute22.com. Several cities we cover are in this county (Chester, Long Hill, Morristown), as well as some roads (Route 287, Route 202, and Route 206.) 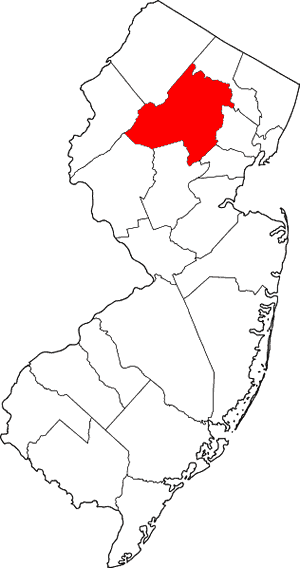 Morris County is a county located in the U.S. state of New Jersey, about 25 mi (40 km) west of New York City. According to the 2010 United States Census, the population was 492,276, up from the 470,212 at the 2000 Census, retaining its status as the tenth-most populous county in the state; since 2010, Morris County’s population has increased by 1.5% to a Census-estimated 499,727 in 2014. The county is part of the New York Metropolitan Area, and its county seat is Morristown. The most populous place was Parsippany-Troy Hills Township, with 53,238 residents at the time of the 2010 Census, while Rockaway Township, covered 45.55 square miles (118.0 km), the largest total area of any municipality.

The area of Morris County was inhabited by the Lenape Native Americans prior to the arrival of European settlers around the year 1000. They came from the Mississippi River area. They lived along the rivers and hunted game, fished, collected plants and nuts.

Henry Hudson explored the Hudson River area in 1609, which later the Dutch did surveys of the area.

There were hostile relations between the Dutch and Native Americans between 1643 and 1660. This prevented colonization by the Dutch of the Morris County region which was technically included in their claimed “New Netherland.”

On August 27, 1664, three English ships approached Fort Amsterdam and the fort was surrendered to the English. The English now controlled New Netherland and Morris County was now under control of the colony of New York. Relations with the Native Americans improved for a while.

There was a war with the Dutch ten years later. The Dutch re-took control of New Amsterdam but after a year returned it to the English. Relations with the Native Americans and English improved for a while.

European settlements began in the early 18th century while it was known as Hunterdon County. Native Americans were still in the area at that time. The land was purchased from the Native Americans for various things such as blankets, shirts, rum, guns, knives, pots and gunpowder. The Native Americans’ concept of selling land was different than that of the Europeans. Colonization occurred along the Atlantic coast and moved inland.

The first settlement in the area today known as Morris County occurred in Pompton Plains by the Dutch in 1695. From 1710 to 1730, various iron mines and forges were established. The first was in Whippany in 1710 and then in Succasunna in 1713.

By 1750, nearly all Native Americans had left New Jersey. This was due to land purchases from the Native Americans, diseases that the Native Americans contracted from Europeans, and due to starvation from the Little Ice Age, during which Native American corn crops failed and rivers froze, preventing fishing. Snowstorms sent the game into semi-hibernation or made them difficult to find. Nut crops such as oak, hickory, beech, walnut, chestnut, and butternut failed some years due to late frosts in spring. Due to all the events that happened, Native Americans went to eastern Canada and others went to the Ohio Valley. The Walking Purchase in September 1737, prevented Native Americans from going to eastern Pennsylvania. At that time, European settlement grew swiftly as there was now land to be farmed and settled.

Morris County was created on March 15, 1739, from portions of Hunterdon County. The county was named for the Governor of the Province of New Jersey, Colonel Lewis Morris. In later years Sussex County (on June 8, 1753) and, after the revolution, Warren County (on November 20, 1824, from portions of Sussex County) were carved out of what had been the original area of Morris County under English rule. 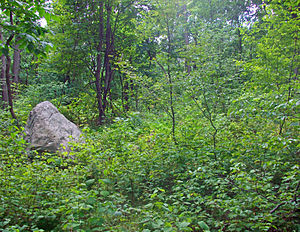 Highest point, in woods near sign on trail indicating highest point in county.

The county rises in elevation and relief from east to west, with only the more developed eastern suburbs in the Passaic River valley being relatively level. The highest point is at 1,395 feet (425 m) above sea level on a mountain south of Pine Swamp in western Jefferson Township. The second-highest point is on a mountain just north of Riker Lake at 1,358 feet (414 m). The lowest point is about 160 feet (49 m) in elevation, at Two Bridges, the confluence of the Passaic and Pompton rivers.

The county is drained by several rivers. The Rockaway River drains 125 square miles (320 km), of the northern section of the county. The Whippany River drains 69 square miles (180 km) of the middle of the county. The South Branch of the Raritan River and the Black River drain the western area. The Loantaka Brook Reservation is a public park with nature, biking, jogging and horse paths, to which 105 acres (42 ha) of land was added as part of a purchase in 2009.

There are several large lakes in Morris County, among them are Lake Hopatcong, Budd Lake, Lake Parsippany, and the Jersey City Reservoir. 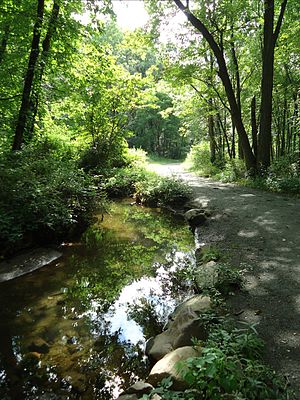 A horse path along a stream in the Loantaka Brook Reservation

Around 500 million years ago, a chain of volcanic islands shaped like an arch collided with proto North America. The islands rode over top of the North American plate. This created the highlands in western Morris County and the eastern section of Morris County.

Around 400 million years ago, a small continent long and narrow collided with proto North America. This created folding and faulting, as compression occurred. Then around 350 million years ago, the African plate collided with North America creating the folding and faulting in the Appalachians. But when the African plate pulled away from North America, an aborted rift valley was created. This half graben, tarts east of Boonton and goes through the middle of Parsippany, south to Morristown, to the south end of Great Swamp. From Parsippany and the Boonton area, the half-graben goes east to the western side of Paterson, where there was another fault by the lava flows. East of the Ramapo Fault is where there is this aborted rift valley. The Ramapo fault goes through the county on a northeast-southwest axis. The fault separates the Highlands from the Piedmont, also known as the Newark Basin. This is an active fault. The last major earthquake occurred in 1884, with a strength measured at 5.3 on the Richter scale.

Around 21,000 B.C., the Wisconsin Glacier covered about half of Morris County. The terminal moraine went from Hackettstown east to north of Budd Lake, east to Rockaway and Denville, then southeast to Morristown then south to the south end of Great Swamp. When the glacier melted around 13,000 B.C. the meltwater created Glacial Lake Passaic. The lake extended from what is now Pompton Lakes through Parsippany south to the south end of Great Swamp. From Parsippany, the lake went east to the lava flows of western Paterson. This lake was thirty miles long and ten miles wide (36 km by 12 km). The depth was about 200 feet (61 m). When the Wisconsin glacier cover Morris County the ice sheet was about 300 meters (980 ft) deep. Due to debris from the glacier, the lake was unable to drain through the Watchung Mountains near Short Hills. Instead, it drained through Moggy Hollow at the southwestern end of the lake. But when the glacier melted and receded to the New York State line, the lake drained through the Little Falls area, as this was lower in elevation than Moggy Hollow. And thus the Passaic river formed.

The swamps of the Great Piece Meadows, Hatfield Swamp, Troy Meadows, Lee Meadows and Great Swamp were all under the Lake Passaic until it drained, and then these areas were created. 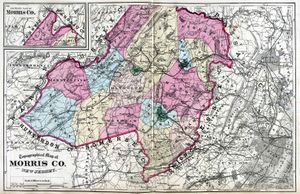 In 2009, some mainstream magazine ranked the county sixth-best place in the nation to raise a family, the best of any county in the state. The ranking was mainly due to the high graduation rate of 98.4% and employment possibilities from area industry.

There are 33 Fortune 500 businesses that have headquarters, offices or a major facility in Morris County. These include AT&T, Honeywell, Colgate-Palmolive, Pfizer, Johnson & Johnson, ExxonMobil, Novartis, BASF, Verizon, and Bayer. Major industries include finance, insurance, real estate, pharmaceuticals, health services, research and development, and technology. There are 13,000 acres (53 km) set aside for 28 county parks. Four county golf courses and 16 public and private courses are in Morris.

Major employers in the county include: 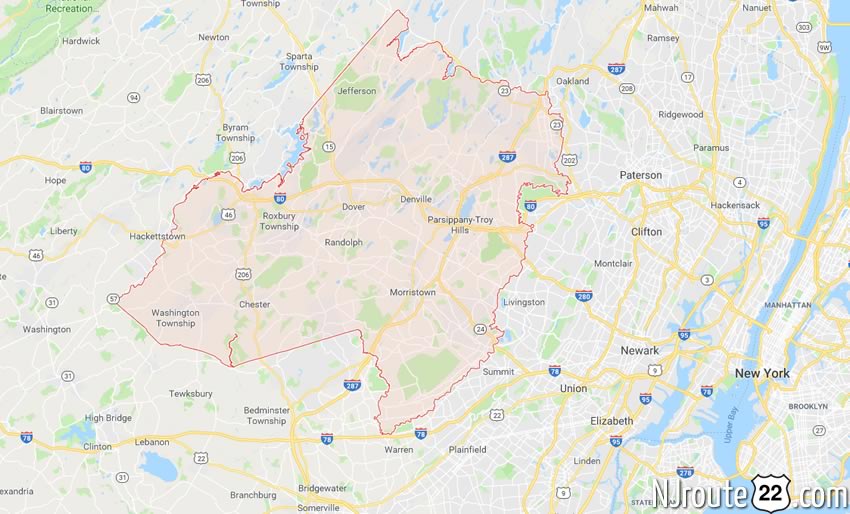