Princeton, NJ may be the furthest here from NJroute22 – but it’s frequently visited. And a very “historically rich” city in NJ. Or so they say.

Typical routes people in the Route 22 area take to get to Princeton are Route 31 south through Hopewell – or Route 206 south.

Princeton, NJ – In case you had no idea where it was.

Princeton is a municipality with a borough form of government in Mercer County, New Jersey, United States, that was established in its current form on January 1, 2013, through the consolidation of the Borough of Princeton and Princeton Township. As of the 2010 United States Census, the municipality’s population was 28,572, reflecting the former township’s population of 16,265, along with the 12,307 in the former borough.

Princeton was founded before the American Revolution and is best known as the location of Princeton University, located in the community since 1756. Although its association with the university is primarily what makes Princeton a college town, other important institutions in the area include the Institute for Advanced Study, Westminster Choir College, Princeton Plasma Physics Laboratory, Princeton Theological Seminary, Opinion Research Corporation, Siemens Corporate Research, SRI International, FMC Corporation, The Robert Wood Johnson Foundation, Amrep, Church and Dwight, Berlitz International, and Dow Jones & Company.

Princeton is roughly equidistant from New York City and Philadelphia. Princeton is close to many major highways that serve both cities and receives major television and radio broadcasts from each.

New Jersey’s capital is the city of Trenton, but the governor’s official residence has been in Princeton since 1945 when Morven in the borough became the first Governor’s mansion. It was later replaced by the larger Drumthwacket, a colonial mansion located in the township. Morven became a museum property of the New Jersey Historical Society.

Princeton was ranked 15th of the top 100 towns in the United States to Live and Work In by some mainstream magazine in 2005.

Although residents of Princeton (Princetonians) traditionally have a strong community-wide identity, the community had been composed of two separate municipalities: a township and a borough. The central borough was completely surrounded by the township. The Borough seceded from the Township in 1894 in a dispute over school taxes; the two municipalities later formed the Princeton Public Schools, and some other public services were conducted together before they were reunited into a single Princeton in January 2013. The Borough contained Nassau Street, the main commercial street, most of the University campus, and incorporated most of the urban area until the postwar suburbanization. The Borough and Township had roughly equal populations.

The Lenni Lenape Native Americans were the earliest identifiable inhabitants of the Princeton area. Europeans founded their settlement in the latter part of the 17th century. The first European to find his home in the boundaries of the future town was Henry Greenland. He built his house in 1683 along with a tavern. In this drinking hole representatives of West and East Jersey met to set boundaries for the location of the township.

Originally, Princeton was known only as part of nearby Stony Brook. James Leonard first referred to the town as Princetown, when describing the location of his large estate in his diary. The town bore a variety of names subsequently, including Princetown, Prince’s Town and finally Princeton. Although there is no official documentary backing, the town is considered to be named after King William III, Prince William of Orange of the House of Nassau. Another theory suggests that the name came from a large land-owner named Henry Prince, but no evidence backs this contention. A royal prince seems a more likely eponym for the settlement, as three nearby towns had similar names: Kingston, Queenstown (in the vicinity of the intersection of Nassau and Harrison Streets) and Princessville (Lawrence Township). 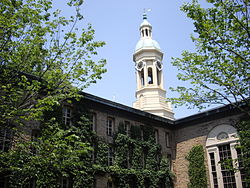 Nassau Hall, which briefly served as the capital of the United States of America in 1783

When Richard Stockton, one of the founders of the township, died in 1709 he left his estate to his sons, who helped to expand property and the population. Based on the 1880 United States Census, the population of the town comprised 3,209 persons (not including students). Local population has expanded from the nineteenth century. According to the 2010 Census, Princeton Borough had 12,307 inhabitants, while Princeton Township had 16,265. The numbers have become stagnant; since the establishment of Princeton University in 1756, the town’s population spikes every year during the fall and winter and drops significantly over the course of the summer. 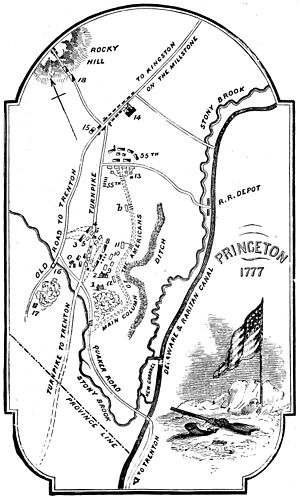 Aside from housing the University of the same name, the settlement suffered the revolutionary Battle of Princeton on its soil. After the victory in 1777, the town hosted the first Legislature under the State Constitution of New Jersey to decide the State’s seal, Governor, and organization of its government. In addition, two of the original signers of the Declaration of Independence—Richard Stockton and John Witherspoon lived in Princeton. Princetonians honored their citizens’ legacy by naming two streets in the downtown area after them.

On January 10, 1938, Henry Ewing Hale called for a group of citizens to discuss opening a “Historical Society of Princeton.” Later the Bainbridge House would be dedicated for this purpose. Previously the house was used once for a meeting of Continental Congress in 1783, a general office and as the Princeton Public Library. The House is actually the property of Princeton University and is leased to the Princeton Historical Society for one dollar per year. The house has kept its original staircase, flooring and paneled walls. Altogether, 70% of the house has been unaltered. Aside from safety features like wheelchair access and electrical work, the house was merely restored to its original look.

During the most stirring events in its history, Princeton was a wide spot in the road; the boundary between Somerset County and Middlesex County ran right through Princeton, along the high road between New York and Philadelphia, now Nassau Street. When Mercer County was formed in 1838, part of West Windsor Township was added to the portion of Montgomery Township which was included in the new county, and made into Princeton Township; the area between the present borough line and the Delaware and Raritan Canal was added to Princeton Township in 1853. Princeton Borough became a separate municipality in 1894.

In the early nineteenth century, New Jersey boroughs had been parish bodies, chartered within existing townships. Princeton Borough received such a charter in 1813, as part of Montgomery and West Windsor Townships; it continued to be part of Princeton Township until the Act of 1894, which required that each township form a single school district; rather than do so, Princeton Borough petitioned to be separated. (The two Princetons now form the Princeton Public Schools.) Two minor boundary changes united the then site of the Princeton Hospital and of the Princeton Regional High School inside the Borough, in 1928 and 1951 respectively.

Cedar Grove, Port Mercer, North Princeton, Princeton Basin, and Jugtown are unincorporated communities that have been absorbed into Greater Princeton over the years, but still maintain their own community identity.

As of the 2010 United States Census, the borough and township had a combined population of 28,572.

Other major roads that are accessible outside the municipality include U.S. Route 1 (in Lawrence, West Windsor & South Brunswick), Interstate 95 (the section north of Trenton) and Interstate 295 (both in Lawrence), and the New Jersey Turnpike (also designated as Interstate 95, east of Trenton). The closest Turnpike exits are Exit 8A in Monroe Township, Exit 8 in East Windsor, and Exit 7A in Robbinsville.

A number of proposed highways around Princeton have been canceled. The Somerset Freeway (Interstate 95) was to pass just outside the municipality before ending in Hopewell (to the south) and Franklin (to the north). This project was canceled in 1980. Route 92 was supposed to remedy the lack of limited-access highways to the greater Princeton area. The road would have started at Route 1 near Ridge Road in South Brunswick and ended at Exit 8A of the Turnpike. However, that project was killed in 2006. 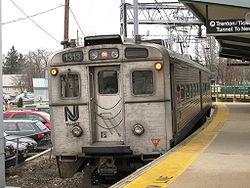 The “Dinky” at the Princeton Branch platform at Princeton Junction.

Princeton is roughly equidistant from New York City and Philadelphia. Since the 19th century, it has been connected by rail to both of these cities by the Princeton Branch rail line to the nearby Princeton Junction Station on Amtrak‘s Northeast Corridor. The Princeton train station was moved from under Blair Hall to a more southerly location on University Place in 1918, and was moved further southeast in 2013. Commuting to New York from Princeton became commonplace after the Second World War. While the Amtrak ride time is similar to New York and to Philadelphia, the commuter-train ride to New York — via New Jersey Transit‘s Northeast Corridor Line — is generally much faster than the equivalent train ride to Philadelphia, which involves a transfer to SEPTA trains in Trenton. New Jersey Transit provides shuttle service between the Princeton and Princeton Junction stations; the train is locally called the “Dinky”, and has also been known as the “PJ&B” (for “Princeton Junction and Back”). Two train cars, or sometimes just one, are used.

Princeton Airport is a public airport lying 3 miles (5 km) north of Downtown Princeton in Montgomery Township. The private Forrestal Airport was located on Princeton University property, 2 miles (3 km) east of the main campus, from the early 1950s through the early 1990s.

The closest commercial airport is Trenton-Mercer Airport in Ewing Township, about 15 miles (24 km) from the center of Princeton, which is served by Frontier Airlines nonstop to and from 17 points nationwide. Other nearby major airports are Newark Liberty International Airport and Philadelphia International Airport, located 39 miles (63 km) and 52 miles (84 km) away, respectively.

People who were born in, residents of, or otherwise closely associated with Princeton include: