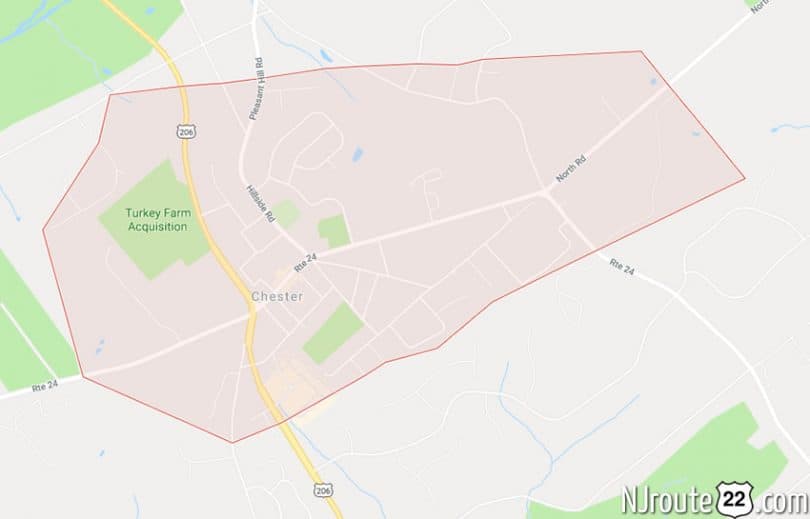 Chester, NJ is an excellent town to frequent in New Jersey. Only 20 minutes from the Somerville Circle, Chester almost has it all. Good shopping, fun places to eat – and a charming downtown worthy enough for almost everyone!

Keep in mind, once again – that this is another one of those circumstances (like Washington, for instance) where you have a borough inside a township.

Chester Borough is a small 1.5 square-mile municipality surrounded by the 30 square-mile Chester Township. 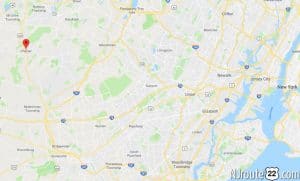 Chester Township was established as a separate political entity on April 1, 1799, including the area of both the Township and the downtown settlement which came to be the Borough. The Borough of Chester was incorporated by an act of the New Jersey Legislature on April 3, 1930, based on the results of a referendum held on April 25, 1930, and is today a separate municipality surrounded entirely by Chester Township. The borough’s name is derived from the township, which was named for Chestershire in England.

The borough is completely surrounded by Chester Township.

There were 615 households, of which 34.0% had children under the age of 18 living with them, 60.0% were married couples living together, 7.8% had a female householder with no husband present, and 28.8% were non-families. 25.9% of all households were made up of individuals, and 14.6% had someone living alone who was 65 years of age or older. The average household size was 2.65 and the average family size was 3.17.

In 2007, New Jersey Governor Jon Corzine created incentives for small towns of less than 10,000 inhabitants to combine with other cities. The goal was to reduce the overall cost of government and thereby offer some tax relief. “New Jersey has 21 counties, 566 municipalities, and 616 school districts, and property taxes average $6,800 per homeowner or twice the national average.”

Chester Borough had originally split from Chester Township in 1930 over the creation of sewer and water infrastructure in the more densely settled center of the municipality. The residents of the rural portions of the Township did not wish to financially support the construction and maintenance of a public sewer or water utility. Since that time rural Chester Township has relied upon individual private wells for water and septic systems for wastewater treatment while the Borough is primarily, although not entirely, served by public sewer and water. Concerns over the extension of utilities into the rural Township with the resultant potential for large-scale growth served as an impediment to consolidation. The prohibition of utility extensions supported by the New Jersey state plan and codified in the Highlands Water Protection Act, along with the development restrictions contained in the Highlands Act have lessened those concerns. Additionally, an aggressive land conservation program in the Township has resulted in over 40% of the 29-square-mile (75 km) Township being placed into permanent preservation, further lessening worries about potential overdevelopment. The two municipalities currently share a common K-8 school district, volunteer fire department, library, first aid squad and other municipal services. Residents are concerned about the unknown costs of a merger and a disproportionate allocation of those costs.

The two mayors had publicly endorsed a cost-benefit analysis of a merger. Two past efforts failed so the towns are taking a slow and deliberate approach to determining the savings if any.

A merger vote planned for November 2010 was delayed for at least a year after Governor Christie’s elimination of equalization funds that would ensure some taxpayers do not pay more due to the merger, as an analysis by the New Jersey Department of Community Affairs estimated that township residents would see an annual increase of $128 on their property taxes while those in the borough would see an average decline of $570 in their taxes.

Chester is located at the point where County Route 513 (also known as old Route 24) and U.S. Route 206 intersect.

New Jersey Transit local bus service was provided on the MCM4 and MCM5 routes until June 2010, when NJ Transit pulled the subsidy.

People who were born in, residents of, or otherwise closely associated with Chester Borough include: 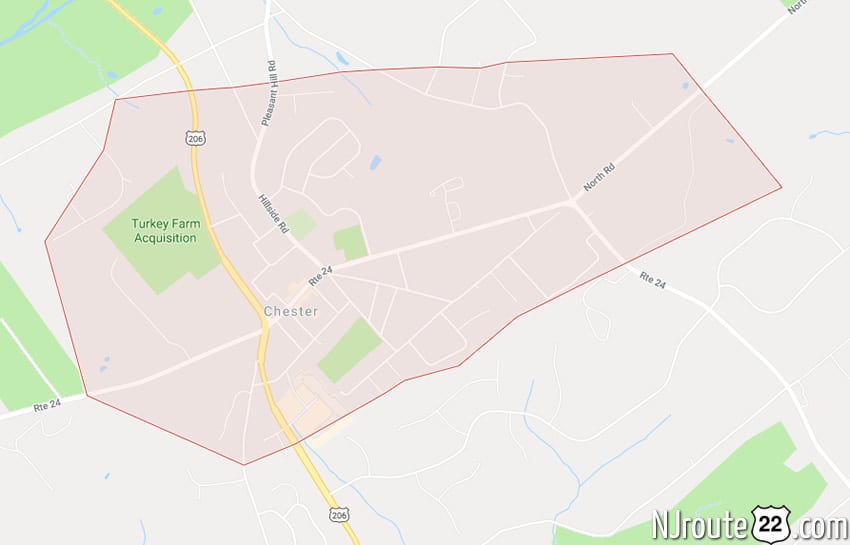