Hunterdon County, NJ is a major part of NJroute22.com. Covering substantial stretches of both the NJ Route 22 Central and NJ Route 22 West zones – this county is one of the best in NJ.

It’s also in the top 20 richest counties in the United States.

Hunterdon County is a county located in the western section of the U.S. state of New Jersey. As of the 2010 United States Census, the population was 128,349, increasing by 6,360 (+5.2%) from the 121,989 counted in the 2000 Census, retaining its position as the state’s 14th-most populous county; The percentage increase since 2000 was the largest in New Jersey, almost triple the statewide increase of 4.5%, and the absolute increase in residents was the third highest. It is part of the New York Metropolitan Area. Its county seat is Flemington. The Bureau of Economic Analysis ranked the county as having the 19th-highest per capita income of all 3,113 counties in the United States (and the third highest in New Jersey) as of 2009.It is part of the Newark-Union, NJ-PA Metropolitan Division of the New York-Northern New Jersey-Long Island, NY-NJ-PA Metropolitan Statistical Area.

Hunterdon County was established on March 11, 1714, separating from Burlington County, at which time it included all of present-day Morris, Sussex, and Warren counties. The rolling hills and rich soils which produce bountiful agricultural crops drew Native American tribes and then Europeans to the area.

Hunterdon County is noted for having the second-lowest level of child poverty of any county in the United States.

The African plate which later collided with North America created more folding and faulting, especially in the southern Appalachians. Then the African and North America plates tore and drifted away from each other.

The Wisconsin glacier that entered into New Jersey around 21,000 BC and then melted around 13,000 BC, did not reach Hunterdon County. However, there are glacial outwash deposits from streams and rivers that flowed from the glacier southward depositing rock and sediment.

The Highlands are part of the Reading Prong. Limestone and shale over igneous rock comprise the Highlands.

The Piedmont includes the Hunterdon Plateau and the Raritan Valley Lowlands which are 150 to 300 feet (46 to 91 m) above sea level. The Piedmont is made up of shale and sandstone. 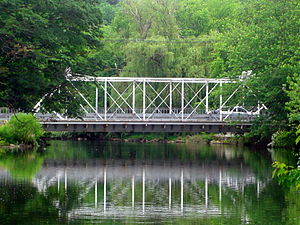 The bridge over the South Branch of the Raritan River in Califon. 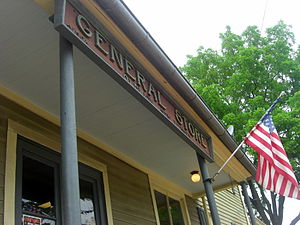 Paleo Indians moved into Hunterdon County between 12,000 BC and 11,000 BC. The area was warming due to climate change. The Wisconsin Glacier in Warren and Sussex County was retreating northward. The area was that of Taiga/Boreal forests. Paleo Indians traveled in small groups in search of game and edible plants. They used spears made of bone, Jasper or black chert. Their campsites are difficult to find as they are many feet below the present surface.

Hunterdon County was separated from Burlington County on March 11, 1714. At that time Hunterdon County was large, going from Assunpink Creek near Trenton to the New York State line which at that time was about 10 miles (16 km) north of Port Jervis, New York. Hunterdon County was named for Robert Hunter, a colonial governor of New Jersey. Language changes over time and location, so by stemming of [s], and a [t] → [d] lenition of the name of his family seat of “Hunterston” in Ayrshire, Scotland, the name “Hunterdon” was derived.

On March 15, 1739, Morris County (which at the time included what would later become Sussex County and Warren County) was separated from Hunterdon County. The boundary between Hunterdon and Somerset counties is evidence of the old Keith Line which separated the provinces of West Jersey and East Jersey.

Transitioning from rural to suburban, Hunterdon County is an exurb on the western edge of New Jersey and home to commuters to New York City and Philadelphia. The county seat, Flemington, is noted as the site of the Lindbergh kidnapping trial which convicted Bruno Hauptmann of the murder of aviator Charles Lindbergh‘s son. With growing towns and shopping areas, as well as relaxing rural areas, Hunterdon County is a far stretch from the urban areas stereotypically associated with New Jersey.

Much of the county is hilly, with several hills rising to one thousand foot in elevation. The highest points are two areas in Lebanon Township, one on the Morris County line, both reaching approximately 1,060 feet (320 m) above sea level. The first is at Smith on the Morris County line and the second is north of the area called Little Brook. This area is known as the Highlands of New Jersey. The lowest elevation is where the Mercer County line reaches the Delaware River, approximately 50 feet (15 m) above sea level. The county is drained by the Musconetcong River in the north. The river flows in a southwest direction. The Lamington River drains the county in the east. The central portion of the county is drained by the South Branch of the Raritan River. The Delaware River drains the western side of the county.

The county borders the following:

Hunterdon County is considered the premier place to hunt white-tailed deer in New Jersey. More deer are harvested each year than any other county according to New Jersey Fish and Game records.

The premier fishing streams are the Musconetcong in the north and the Lamington River. The NJ Fish and Game stocks thousands of rainbow, brown, and brook trout in these streams as well as other streams such as the South Branch of the Raritan River.

There is also Round Valley Reservoir and Spruce Run Reservoir. Both are manmade reservoirs that provide boating and fishing opportunities for patrons. Round Valley is one of New Jersey’s trophy trout lakes, the reservoir holds the state records for smallmouth bass, brown trout, lake trout, and American eel. Spruce Run held the state record for Northern Pike for nearly 30 years and offers a large variety of species for anglers to pursue.

Hunterdon County ranked as the 7th among the highest-income counties in the United States with a per capita income of $36,370. It ranks fourth among U.S. counties for household income according to the most recent data from the U.S. Census Bureau. Hunterdon County’s median household income was $99,099, behind only Loudoun County, Fairfax County, and Arlington County, Virginia. As of 2005, Hunterdon had the third-highest median property tax of any county in the nation at $6,988, the highest in New Jersey. As of the Tax Foundation‘s rankings based on 2006 data, Hunterdon had taken the top spot for highest median property tax at $7,999.

Certain municipalities, such as Clinton and Union Township, have prisons within their borders, so their racial demographics will be slightly skewed when compared with the rest of the county.

There were 47,169 households, of which 33.4% had children under the age of 18 living with them, 62.8% were married couples living together, 7% had a female householder with no husband present, and 27.2% were non-families. 22% of all households were made up of individuals, and 8.2% had someone living alone who was 65 years of age or older. The average household size was 2.62 and the average family size was 3.1. 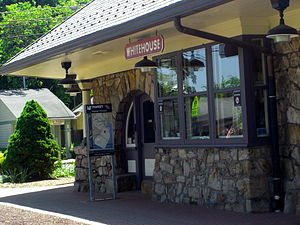 Rail service to the northern part of the county from Newark Penn Station is provided to High Bridge, Annandale, Lebanon and Whitehouse Station by New Jersey Transit‘s Raritan Valley Line.

In addition, The Link operates demand-response service across the county, as well as fixed-route service in Flemington. Trans-Bridge Lines also provides service to New York City, as well as several towns/cities west in Pennsylvania.