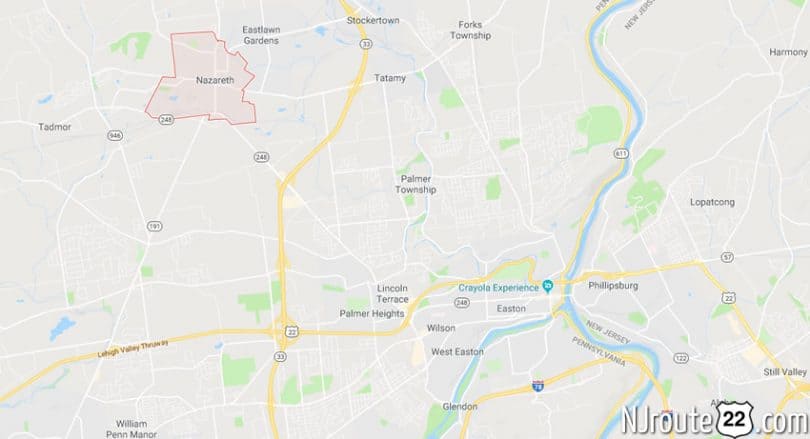 Another Pennsylvania spot we’ll chime in about is Nazareth, PA.

A few miles off the Route 22 digs – but worth mentioning. Stay tuned to hear more! 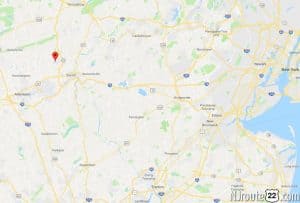 Can you understand a map?

Nazareth is a borough in Northampton County, Pennsylvania, in the United States. The population was 5,746 at the 2010 census.

Nazareth is located seven miles (11 km) northwest of Easton, four miles (6 km) north of Bethlehem and twelve miles (19 km) northeast of Allentown. It is located in the center of Northampton County, and is part of Pennsylvania’s Lehigh Valley region.

The borough is named for the Biblical town of Nazareth, where Jesus spent his youth. The names of other places in the Lehigh Valley area of Pennsylvania are similarly inspired, including Bethlehem, Emmaus, Egypt, and Allentown‘s Jordan Creek.

Nazareth was founded in 1740 by Moravian immigrants from Germany. The property was purchased from George Whitefield after the construction of the Whitefield House. Initially, Nazareth was specifically Moravian by charter. Outside faiths were not allowed to purchase property within Nazareth, a basically all German Protestant community.

In 1735 a small group of the Moravian missionaries had begun work in the newly settled community of Savannah, Georgia. Their intent was to evangelize the native American tribes and minister to the settlers. Governor Oglethorpe, founder of Georgia, and John and Charles Wesley, founders of the Methodist Church and deeply interested in Moravian ideals, came along on the same boat. The Brethren settled along the Savannah River in Georgia. Like the Quakers, the Brethren refused to take part in the war with the Spanish and, as a result, they were evicted from Georgia in 1739.

George Whitefield, a widely known itinerant preacher who had served for a time as chaplain of Savannah, brought the group of evicted Georgia Brethren north to Philadelphia in his sloop. Whitefield had grandiose plans, and one of them was for a school for Negro children to be established on his tract of 5,000 acres (20 km2) called the Barony of Nazareth. He invited the Brethren who accompanied him to Philadelphia to settle at this location for the time being and hired them to build his school. By the end of June, 1739, the first log dwelling was erected.

The workers struggled, the weather did not cooperate, and winter soon arrived. They quickly erected a second log house. After its completion, word came that Whitefield had returned to Pennsylvania, bristling and angered by theological disputes with certain Moravians, particularly on the issue of predestination. He evicted the Moravian Brethren.

While evicted from the Barony, Moravian leaders in England were negotiating to buy the entire Barony. When Whitefield’s business manager suddenly died, Whitefield discovered that his finances, shaky on more than one occasion, would not allow him to proceed with his Nazareth plan. He was forced to sell the whole tract. On July 16, 1741, it officially became Moravian property.

Nazareth was originally planned as a central English-speaking church village. But in October 1742, its 18 English inhabitants departed for Philadelphia. Meanwhile, the Nazareth tract was largely in the hand of Captain John, a Lenape chieftain who (along with his followers) stubbornly refused to leave, even though they no longer owned the land. In December 1742, Count Zinzendorf, a Moravian benefactor, made a settlement with Captain John, and whose tribe moved back into the hinterland.

During 1743, the still unfinished Whitefield House was put in readiness for 32 young married couples who were to arrive from Europe. On the second day of the new year, 1744, the couples went overland to Nazareth to settle in the nearly completed Whitefield House.

The result was that Nazareth began to increase in population. Enough visitors were attracted to the town that the Rose Inn was built in 1752 on an additional tract to the north. Finally, in 1754, Nazareth Hall was built in hopes that Count Zinzendorf would return from Europe and settle in Nazareth permanently, but he never returned to the Americas. However, in 1759 Nazareth Hall became the central boarding school for sons of Moravian parents. Later it attained wide fame as a “classical academy.” This eventually led to the founding, in 1807, of Moravian College and Theological Seminary, now located in Bethlehem. The Nazareth Hall Tract was added to the National Register of Historic Places in 1980.

Religious diversity of the 1900s

Nazareth’s residents’ religion reflected a largely German background in evangelical churches of fairly large sizes for such a small town, divided among the Moravian, Lutheran, Reformed (now part of the United Church of Christ), and Roman Catholic worship centers of the town. The town also hosted a fairly sizable Italian and Polish population, which largely attended Holy Family Catholic Church, in the area.

During a great immigration to the eastern Pennsylvania counties of the late 1900s from New Jersey and New York, the population expanded significantly. Developers from the New Jersey area were responding to tighter controls and regulations on new construction in the state of New Jersey by moving their enterprises to Pennsylvania.

The Nazareth Historic District was added to the National Register of Historic Places in 1988.

Nazareth is located at

According to the United States Census Bureau, the borough has a total area of 1.7 square miles (4.4 km2), all of it land.

Nazareth’s climate is similar to the rest of the Lehigh Valley, with four distinct seasons, humid summers, cold winters, and very short and mild springs and falls. Nazareth’s topography can best be described as hilly, as the town itself sits atop a local outcropping underground of one of the richest veins of limestone in the U.S. Much of the farmland surrounding Nazareth is being converted into close sitting lots of suburban housing, for predominantly commuter households.

Nazareth was home to the Nazareth Speedway, a one-mile tri-oval paved track of Indy and USAC racing fame. Nazareth is also home to racing champions Mario Andretti, Michael Andretti, and third-generation driver Marco Andretti. The track was closed in 2004, and no announcements have been made about what the land will be used for.

Nazareth is the global headquarters for C.F. Martin & Company, which manufactures Martin guitars. Martin guitars are handmade instruments that once were made by artisans who apprenticed for years to learn their trade. Now, Martin Guitars are made largely on an assembly line monitored and assisted by workers, computers, and lasers. Assembly lines at Martin were instituted to lower costs, improve speed of production, and compete with foreign manufacturers, without which efforts it is said that the company would have ceased to survive. 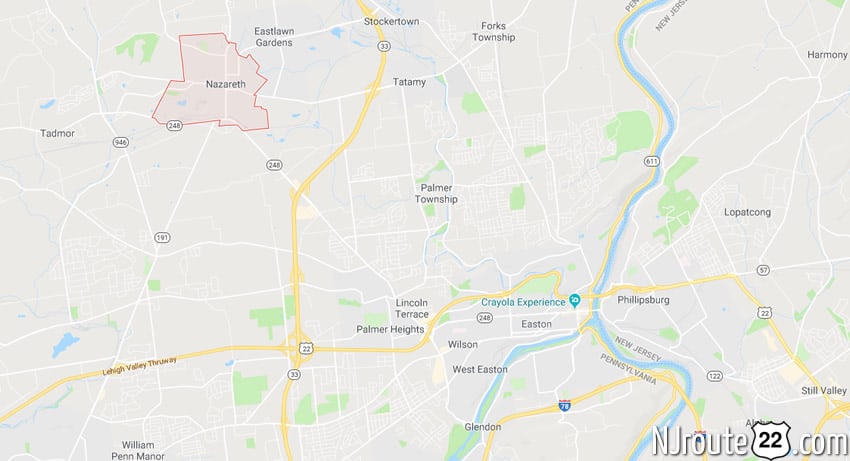