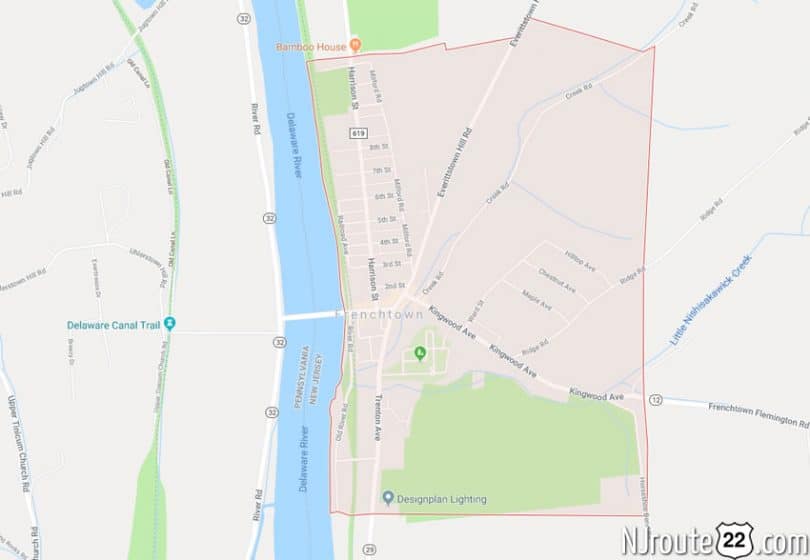 Many people have heard about, or even have been to Frenchtown, NJ. Mainly because of it’s “artsy” progressive community. We include it on NJroute22.com because it is a decent destination for a day trip on nice days. Relatively easy to get to – with plenty of other places of interest on the way to and from! 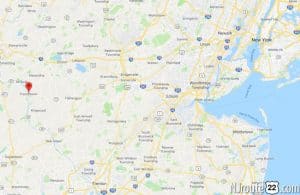 To put Frenchtown, NJ in a wider perspective.

Frenchtown is located along the banks of the Delaware River on the Hunterdon Plateau. Various names have been applied to this settlement, after the many ferry operators residing on both sides of the river. The community had variously been known as Alexandria Ville, Sunbeam and Frenchtown over the years. The Borough was formed by an act of the New Jersey Legislature on April 4, 1867, from portions of Alexandria Township. Additional territory was acquired from Kingwood Township in 1876.

In 1757, three joint owners of a tract purchased from the West Jersey Land Society began laying out streets and building lots at Calvin’s Ferry. The developing town was to be called “Alexandria” in honor of William Alexander, Lord Stirling, one of the three owners. In 1776, the three sold the settlement to Thomas Lowrey, a Flemington speculator.

In 1794, Lowrey sold the tract to Paul Henri Mallet-Prevost, a Swiss fugitive from the French Revolution. He and other early settlers were French speaking, leading some to begin calling the place “Frenchtown.”

The town grew substantially in the next four decades. A trade in grain and other farm products developed. Boatmen and river men helped fuel Frenchtown’s growth through their buying of cargo and food, and hiring of pilots. In the years after Henri Mallet-Prevost’s death, his sons sold off portions of their property; no longer was the town privately owned.

The arrival of the Belvidere Delaware Railroad in 1853 sparked continued growth in Frenchtown. Steam-powered industry became widely developed, and by the 1860s, mills were being converted into larger factories. Around the same time, the town had three major hotels, The Lower Hotel (Present day Frenchtown Inn), The Middle Hotel (no longer existing), and the Upper Hotel (The National Hotel). In 1889, Britton Brothers Big Brick Store, which sold a variety of goods, opened on Bridge Street.

In the early 20th century, growth was spurred by the arrival of Frenchtown Porcelain Works, the establishment of the Milford plant of the Warren Paper Company, and the rise of the poultry industry.

Frenchtown borders Kingwood Township and Alexandria Township. Frenchtown also borders the Commonwealth of Pennsylvania and is south of Milford borough.

Frenchtown Solar is a group of three photovoltaic arrays forming one of the largest solar farms in the state covering 110 acres (44.5 ha) with 68,500 solar panels and 20.1-megawatt capacity.

There were 596 households, of which 26.7% had children under the age of 18 living with them, 46.0% were married couples living together, 11.1% had a female householder with no husband present, and 38.6% were non-families. 31.4% of all households were made up of individuals, and 8.7% had someone living alone who was 65 years of age or older. The average household size was 2.27 and the average family size was 2.88.

People who were born in, residents of, or otherwise closely associated with Frenchtown include: 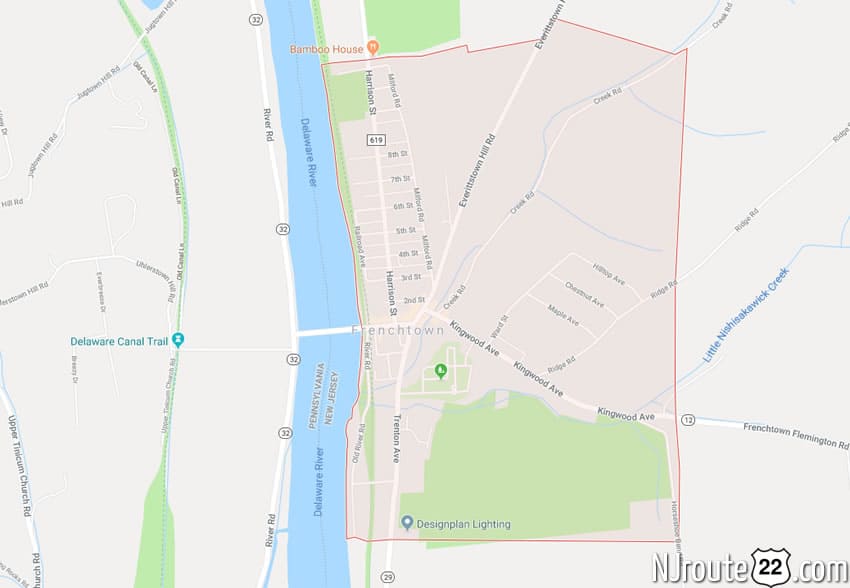