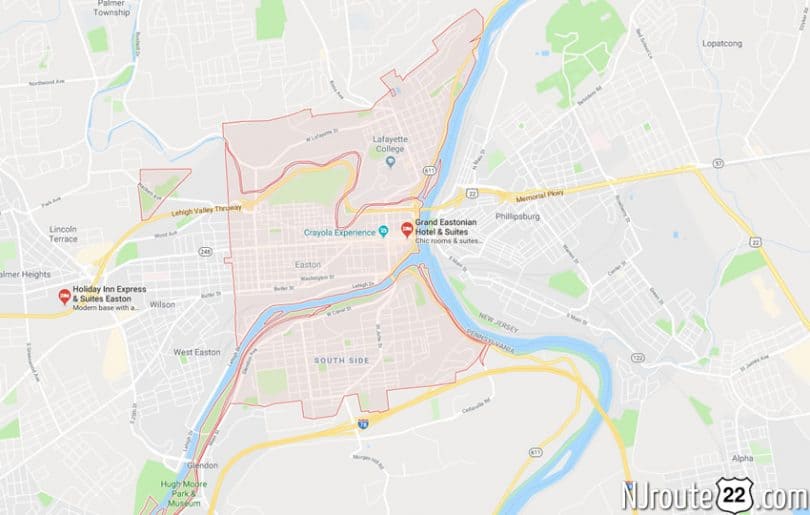 For those that live near the western part of Route 22, Easton PA is a viable destination.

It has history, it has culture and many other aspects that make it stand out in comparison to other venues in NJ.

People (used) to have good reasons to head over to Pennsylvania in the past. Most often it was lower prices due to lower taxes (on things like cigarettes), as well as legal fireworks. But much of that has been siphoned away from PA. As cigarette prices are similar now, and low-caliber fireworks are now being sold in places in NJ like supermarkets!

One can only wonder what will happen to our western neighbor over time – as they’ve been know to have both economic issues – as well as a little narcotics problem.

But we like heading into other territories – so we’ll share some of our wisdom about Easton and other Pennsylvania municipalities for you all. 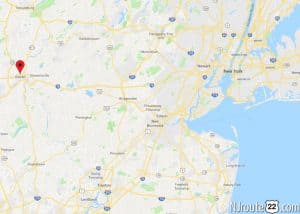 Easton is not in New Jersey.

Easton is a city in and the county seat of Northampton County, Pennsylvania, United States. The city’s population was 26,800 as of the 2010 census. Easton is located at the confluence of the Delaware River and the Lehigh River, roughly 55 miles (89 km) north of Philadelphia and 70 miles (110 km) west of New York City.

The city is split up into four sections: Historic Downtown, which lies directly to the north of the Lehigh River, to the west of the Delaware River, continuing west to Sixth Street; The West Ward, which lies between Sixth and Fifteenth Streets; The South Side, which lies south of the Lehigh River; and College Hill, a neighborhood on the hills to the north which is the home of Lafayette College. The boroughs of Wilson, West Easton, and Glendonare also directly adjacent to the city; the first and largest of which, Wilson, partially aligns in the same North-South Grid as the city of Easton.

Centre Square, the town square of the city’s Downtown neighborhood, is home to the Soldiers’ & Sailors’ Monument, a memorial for Easton area veterans killed during the American Civil War. The Peace Candle, a candle-like structure, is assembled and disassembled every year atop the Civil War monument for the Christmas season.

The Lenape Native Americans originally referred to the area as “Lechauwitank”, or “The Place at the Forks”. The site of the future city was part of the land obtained from the Delawares by the Walking Purchase. Thomas Penn set aside a 1,000 acres (4.0 km) tract of land at the confluence of the Lehigh and Delaware rivers for a town. Easton was settled by Europeans in 1739 and founded in 1752, and was so named at the request of Penn; he had recently married Juliana Fermor, the daughter of Lord Pomfret whose estate was called Easton Neston, near Towcester, Northamptonshire, England. As Northampton County was being formed at this time, Easton was selected as its county seat.

During the French and Indian War, the Treaty of Easton was signed here by the British colonial government of the Province of Pennsylvania and the Native American tribes in the Ohio Country, including the Shawnee and Lenape.

Easton was an important military center during the American Revolutionary War. During the Revolutionary War, Easton had a military hospital. On 18 June 1779, General John Sullivan led 2,500 Continentals from Easton to engage British Indian allies on the frontier. On Easton was one of the first three places the Declaration of Independence was publicly read (along with Philadelphia and Trenton). It is claimed that the Easton flag was flown during that reading, making it one of the first “Stars and Stripes” to fly over the colonies. This flag, which is known to date to the War of 1812, currently serves as Easton’s municipal flag.

Easton was a major commercial center during the canal and railroad periods of the 19th century, when it was a transportation hub for the steel industry. Three canals, the Delaware, the Lehigh, and the Morris, served to connect the coal regions to the north and west, the iron works to the west, the commercial port of Philadelphia to the south, and the New York City area to the east via a connection with the Morris Canal across the Delaware River in Phillipsburg, New Jersey. When canal transportation was largely replaced by railroads, Easton was served by five railroads, and only lost its prominence in transportation with the rise of the automobile in the mid-20th century.

Like the Pennsylvania Dutch region to the southwest, Easton has a strong German heritage. The Pennsylvania Argus, a German-language newspaper, was published in Easton until 1917. As part of their heritage, the Germans put up one of the continent’s earliest Christmas trees in Easton; Daniel Foley’s book states that “Another diary reference unearthed recently makes mention of a tree set-up at Easton, Pennsylvania, in 1816.” There is a plaque in Scott Park (along the Delaware River) commemorating this event.

Easton is located at

Downtown Easton lies at the confluence of the Lehigh River and Delaware River and is a low-lying area surrounded by hills to the north, west, and south. North of downtown is College Hill, the home of Lafayette College. South Easton, divided by the Lehigh River from the rest of the city, was a separate borough until 1898; it was settled initially by Native Americans, later by canal workers, and then was later the home of several silk mills.

Easton’s Two Rivers Landing is the home of two interactive children’s museums, the National Canal Museum, which focuses on the importance of canals in the region, and the Crayola Factory, which is owned by Crayola LLC (formerly known as Binney & Smith), a major toy manufacturer based in nearby Forks Township. The global headquarters for Victaulic is also based in nearby Forks Township. The city was also once the home of Dixie Cup Corporation, the manufacturer of Dixie Cups and other consumer products. Majestic Athletic, the current provider of uniforms for Major League Baseball, is based in Easton.

Air transport to and from Easton is available through Lehigh Valley International Airport, which is located approximately 15 miles (24 km) west of the city, in Hanover Township.

Easton has no passenger rail service. Until 1983 New Jersey Transit‘s Raritan Valley Line terminated at Phillipsburg, New Jersey, on the other side of the Delaware River from Easton. The line now stops at High Bridge, New Jersey, roughly 20 miles (32 km) to the east. Under NJT’s I-78 Corridor study this service would be restored. 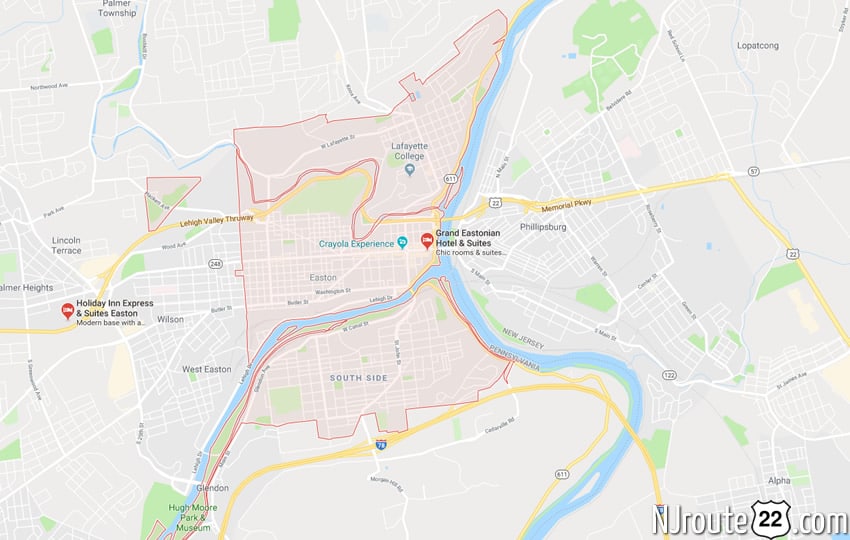