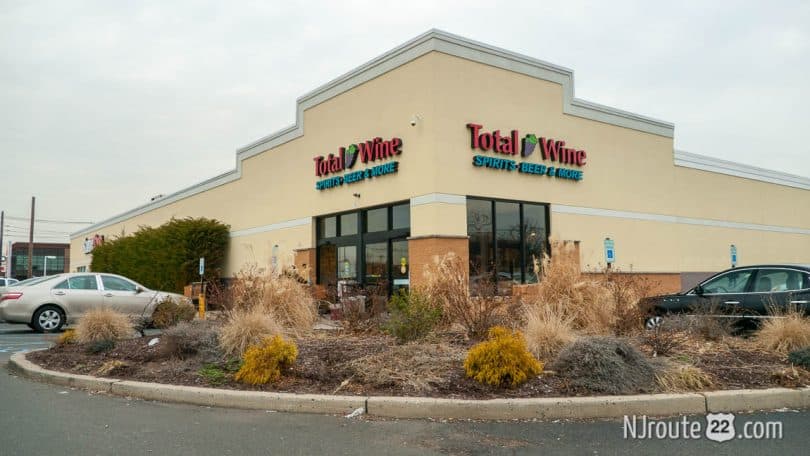 If you look at our article about the Major Liquor Stores in NJ – we specifically chose not to include Total Wine & More as part of our analysis.

Even though they’re the largest wine retailer in America – they have a small sampling in NJ – and only one location within the NJroute22.com coverage area (950 Springfield Rd., Union, NJ 07083).

However, that doesn’t stop us from poking around, and wondering what is the deal with this Total Wine & More corporation.

We spoke to some other area liquor stores along Route 22 about the opening of Total Wine & More in their neck of the woods.

Many people felt that this major liquor store would damage or even destroy other local businesses. But that didn’t happen.

One, because there is enough demand for alcohol, especially in densely-populated areas – that plenty of players can participate. (Should we open up a liquor store?)

Below are some pictures from the Total Wine & More Union location.

So what do you think about Total Wine & More Union?

Well – for one thing, it’s probably the largest liquor store in New Jersey. The size of the store is amazing. They have a LOT of “selection.” It’s like a giant Home Depot for wine.

As far as prices – I’d say they’re middle of the road. Many of their bottles are “exclusive,” so it’s hard to do a true comparison. We did a little spot-checking of familiar brands and found that some prices were on par, and others were a bit higher. Especially for the magnums.

They do offer a “mix and match” price discount for purchases of six bottles or more – so that isn’t too shabby. 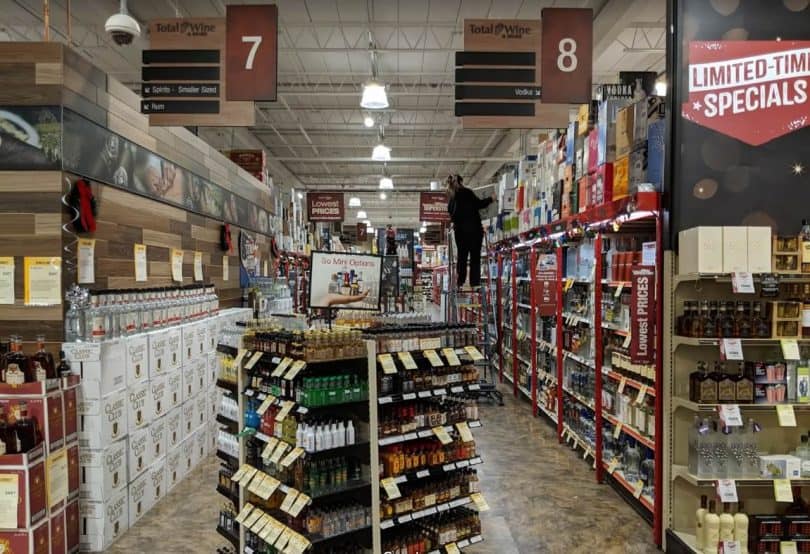 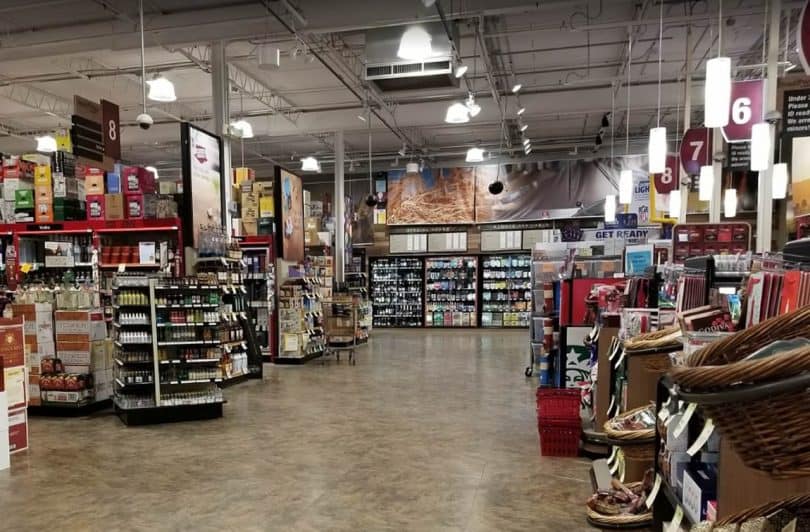 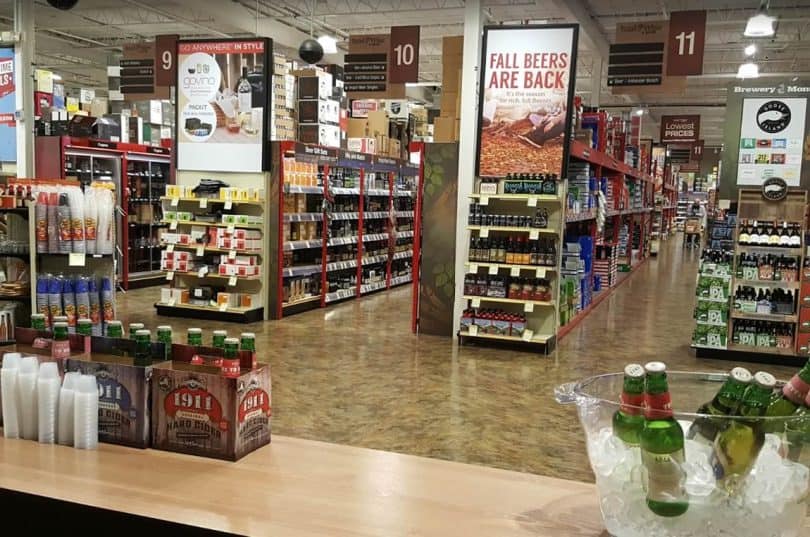 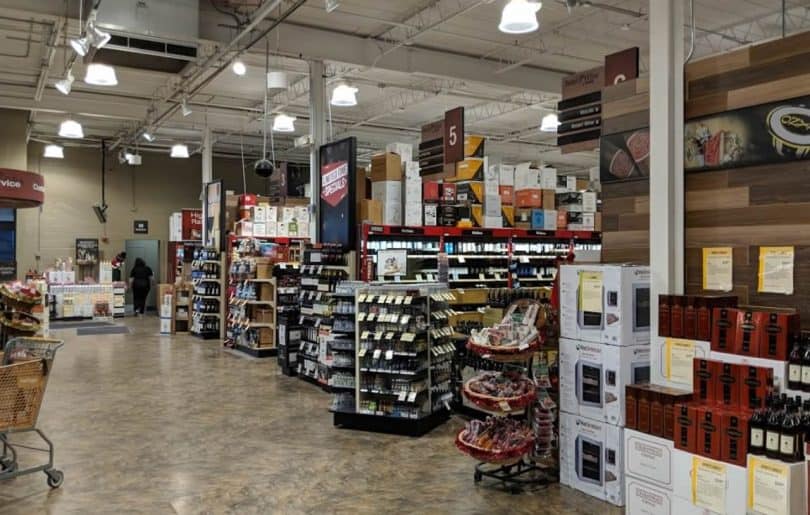 Our observations lead us to conclude that a “local” liquor store has incredible staying power.

I think the familiarity (same employees) plays a huge role. Getting comfortable with an establishment is a psychological hook that keeps customers coming back.

Plus – many of these other local places offer services that major liquor stores may not (beyond the local feel), such as lottery, tobacco, and other intangibles.

One nearby liquor store mentioned that their regular customers often suck down 50ml bottles of liquor outside the establishment while scratching lottery tickets and having smokes! That doesn’t happen at big-chain stores. That’s the local advantage that many of these surviving places can claim.

Who knows – people are unpredictable in most cases – despite what you think about the “data” you examine.

Here’s what the “encyclopedia” has to say about Total Wine & More:

Brothers David and Robert Trone founded Total Wine in 1991. Total Wine & More started as a small, independent store (2,500 sq. ft.) in Claymont, Delaware and was followed with a second store in Milltown, Delaware.

Total Wine & More grew steadily through the 1990s, expanding state by state down the east coast. Total Wine entered Florida in 2005, and then California and Arizona in 2007. As they expanded, the Trones brought in executives from other retailers such as BJ’s, Zales, Bloomingdales, Toys R Us, The Home Depot, and Office Depot.

In 2016, Total Wine was served with several-day license suspensions by the Massachusetts Alcoholic Beverages Control Commission for selling liquor below its costs, a loss leader pricing strategy not allowed within the state’s liquor industry. Total Wine sued the state’s regulators to overturn the suspensions, and won based on the final cost of the liquor being less than that shown on the initial invoices.

Owned and operated by Retail Services and Systems, Total Wine & More offers a large selection of products and advertises them as competitive in price. Each Total Wine store carries approximately 8,000 different types of wines from wine-producing regions around the world, 3,000 types of spirits (where permitted by law), and about 2,500 beers. Each store also carries accessories, gifts, and cigars.

Total Wine & More has about 5,000 employees, including 500 employees at their corporate headquarters in Bethesda, Maryland and 800 wine specialists who must demonstrate wine knowledge before they are invited to join the company. All wine department employees must undergo an initial 150-hour training program, participate in weekly team wine tastings, and attend monthly wine producer seminars. Some employees travel to wine-growing regions such as Napa Valley, California and the French regions of Bordeaux, Burgundy, and Champagne on company-sponsored educational trips.

Since its founding, Total Wine & More has given millions of dollars in financial and in-kind donations to a range of nonprofits. In 2015, Total Wine donated more than $6 million to 7,000+ local charities in 18 states. In 2014, Total Wine & More received the prestigious 2014 Market Watch Award for Community Service from Market Watch, the nation’s leading beverage alcohol industry publication. Wine Spectator editor Marvin Shanken said, “The level of time, energy and financial resources that David and Robert Trone have devoted to community service is truly remarkable.”

Total Wine & More offers a variety of opportunities for their customers to learn more about the wines, beer, and spirits that are sold in their stores. Each store hosts weekly tastings, special events and classes where customers can learn from experts, winemakers, brewmasters and industry professionals (as allowed by different state laws). Total Wine pioneered the live virtual tasting, where well-known winemakers host a tasting from their vineyard, which is streamed live in Total Wine’s classrooms.

Education Centers are also made available for use in every local community. Total Wine & More offers free meeting space for local businesses, clubs, and organizations. Located in over 60 Total Wine stores, each Center is a private room equipped for meeting hosting, and the stores also provide a complimentary 30-minute wine tasting for all attendees (as allowed by different state laws).

Adam Strum, chairman of Wine Enthusiast, said of Total Wine: “They’re very focused on educating the consumer… they really invest a lot of time in their employees, their training. That’s one of the reasons they have been so fabulously successful.”