5 Ways “the New Normal” is Getting Worse and Worse

It would be considered “normal” to flat out and wholeheartedly reject these “mandates,” and completely abnormal to accept them and be merry.

5 Ways “the New Normal” is Getting Worse and Worse

It’s been a big few days for the New Normal narrative and, through the deliberately cultivated haze of confusion, it’s not hard to see the world they want to build is taking shape.

The state of Victoria, and the city of Melbourne, have declared a “state of disaster” and instituted a lockdown and curfew. The state’s 6.3 million inhabitants, nearly 5 million in the city, have to follow these restrictions:

Since march, Australia has had 247 Covid19 deaths, across the entire country. The median age of these deaths is over 80.

Dr Amir Khan appeared on ITV’s Good Morning Britain today, suggesting men – who are notionally at increased risk of coronavirus infection – should take a contraceptive pill filled with oestrogen. His theory, which he did not support with research, is that the oestrogen will boost the male immune system.

Hormone treatment is a big deal, potentially dangerous and seriously life-changing. To suggest its use to treat a disease which is harmless in over 95% of cases is borderline insanity, especially with no research to back it up. We tweeted about at the time, but GMB’s twitter account has since deleted the video.

At a time when doctors are named-and-shamed (and even fired) for suggesting a known safe medicine like HCQ, or sites like ours are branded “misinformation” for pointing out that PCR tests are unreliable, that a man should appear on national television making such ridiculous claims boggles the mind.

4. DOOR TO DOORS TESTS IN LEICESTER 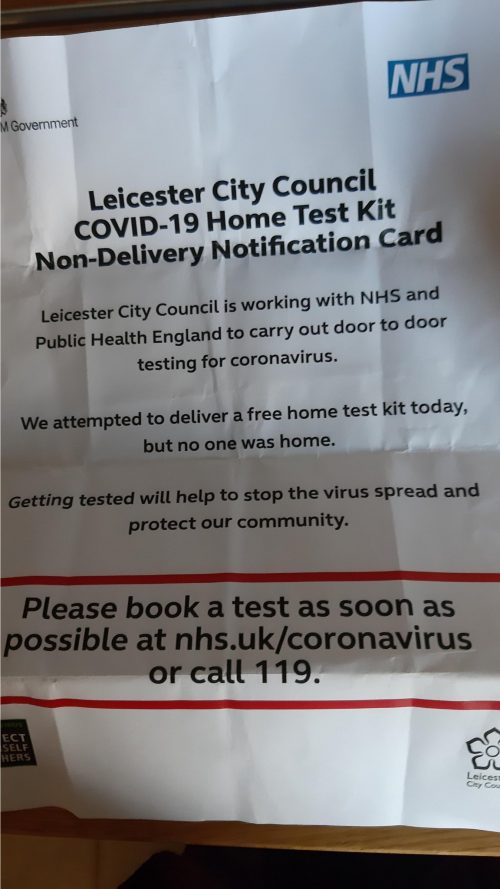 It has since been confirmed genuine. In the UK city of Leicester they are literally going door-to-door to test people. The mayor of Leicester said on the Leicester council website:

Testing is vitally important as it provides us with the information we need to track the virus […] That’s why we’re helping to run the biggest testing operation in the country, mobilising around 500 volunteers to support door-to-door testing, particularly in areas of the city where positive test results have been higher.

That’s not all the testing news either, new 90 minute tests are set to be used in schools as soon as possible, with a DNA based test set to be rolled out nation wide in September which will “eliminate false negatives”.

There is not one word in the article about “eliminating” false positives, which are very common in all PCR-based testing. So prepare for a huge wave of “new cases” when these tests enter wide circulation.

If you don’t like being forced to wear masks (and/or visors), or being placed under house arrest or (for some reason) under a curfew, or indeed, having to take hormone treatments…well don’t worry. Because the World Economic Forum has the solution – immunity passports.

This is not a new idea, it’s been floating around for months, but now the WEF is actually pushing an app that…

uses blockchain technology to store encrypted data from individual blood tests, allowing users to prove that they have tested negative for COVID-19.

It goes on to say that using this kind of app is the only solution to getting everything back to (the old) normal:

If you think this all sounds like something from a dystopian novel, well you’re right. But there’s a silver lining. The app which uses your medical history to decide if you’re allowed to travel will be real environmentally friendly:

CovidPass commits to mandatory carbon offsetting for each flight passenger, to preserve the environmental benefits of reduced air travel during the crisis.

So there’s that, at least.

It’s not hard to see the pattern taking shape here. Increasingly strict social controls on what you can wear, where you can go, when you can go there and so on and so on…and then the proposed solution.

A brief test and a little app that tracks your movement, or labels you nice and clean, a brand new vaccination for anybody who wants it (and most of the people who don’t) and then we can get back to normal.

It is manipulative blackmail of the worst kind, and it appears to be working.