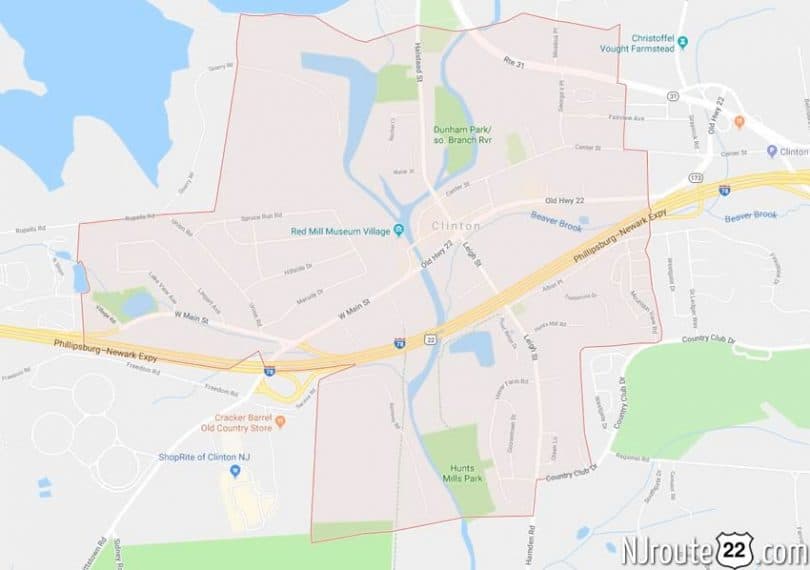 Why don’t they combine both Clinton Town (1.4 sq. mi.) and Clinton Township (33.8 sq. mi.)? We feel it’s a ludicrous situation to have two similar named towns right next to each other – EACH WITH THEIR OWN GOVERNMENT! We do not care. Both are considered “Clinton” to us. However – we still need to separate them here. What a pain.

See the “encyclopedia” entry below:

When the Clinton post office was established in 1829, it was named for DeWitt Clinton, Governor of New York and the primary impetus behind the then-newly completed Erie Canal.

Clinton was incorporated as a town by an act of the New Jersey Legislature on April 5, 1865, within portions of Clinton, Franklin, and Union Townships. Clinton gained full independence from its three parent townships in 1895.

The town is perhaps best known for its two mills which sit on opposite banks of the South Branch Raritan River. The Red Mill, with its historic village, dates back to 1810 with the development of a mill for wool processing. Across the river sits the Stone Mill, home of the Hunterdon Art Museum for Contemporary Craft and Design, located in a former gristmill that had been reconstructed in 1836 and operated continuously until 1936. In 1952, a group of local residents conceived of a plan to convert the historic building into an art museum, which is still in operation today.

Clinton is considered an exurb of New York City, as Hunterdon County lies on the western fringe of the New York City Metropolitan Area, which is mainly rural with scattered housing developments and old farm homes. Clinton is part of the Primary Metropolitan Statistical Area of Middlesex, Somerset and Hunterdon counties in New Jersey. It serves as a “bedroom community” for many commuters working in and around Northern New Jersey and New York City, often younger residents who have supplanted long-time residents of Clinton.

There were 1,057 households, of which 37.0% had children under the age of 18 living with them, 55.2% were married couples living together, 9.7% had a female householder with no husband present, and 31.2% were non-families. 25.4% of all households were made up of individuals, and 8.8% had someone living alone who was 65 years of age or older. The average household size was 2.57 and the average family size was 3.14.

The construction company Foster Wheeler has its operational headquarters in Clinton.

Clinton Fire Department (CFD) is located on the corner of New Street / Old Route 22 in Clinton. About 15% of the department’s calls annually involve actual fire, while the rest of the CFD’s calls are roughly broken down into 15% motor vehicle accidents, 15% hazardous conditions, 5% service calls, 25% good intent calls with no fire found and 25% alarm activations/false alarms, averaging about 190 calls annually. The department offers three types of membership namely Active firefighter, Junior firefighter and Associate membership to prospective members. The department runs mutual aid calls with Annandale Hose Company, High Bridge Fire Department, Quakertown Fire Company, Lebanon Fire Company and Pattenburg Fire Company and other fire departments in Hunterdon Country, which have become an invaluable resource for large incidents. The Division of Fire is a municipal fire department and is responsible for all fire-related incidents in the Township. The personnel is provided by the all-volunteer Annandale Hose Company #1. There are two fire stations. One is located at 68 Beaver Avenue and the second is located at 1215 Route 31 South. Our apparatus consists of four engines, two command vehicles, one tower ladder, one tanker, and two brush trucks. The department covers an area of over 30 square miles and responds to around 500 incidents each year. The department has 45 active members who respond to calls. Each new member is trained to State Firefighter standards and equipped to meet national standards. Our members put in hundreds of hours each year in classes, training, and drills. They are always seeking volunteers not only for firefighting but also for other administrative duties.

The Town of Clinton is situated off Route 31, which is in turn off of Interstate 78/U.S. Route 22 via Exits 16 and 17. Route 173 and County Road 513 runs through the center of town. Convenient access to Interstate 78 provides Clinton with a convenient route to and from New York City and the Lehigh Valley in Pennsylvania. Philadelphia can also be easily accessed from Clinton via New Jersey Route 31 to Interstate 95 South.

Trans-Bridge Lines offers buses on a route that provides service from Allentown and Bethlehem, Pennsylvania to the Port Authority Bus Terminal in Midtown Manhattan and New York City-area airports at a stop at the park-and-ride on Route 31 in Clinton. Limited NJ Transit Rail is also accessible at the Annandale station on the Raritan Valley Line.

People who were born in, residents of, or otherwise closely associated with Clinton include: 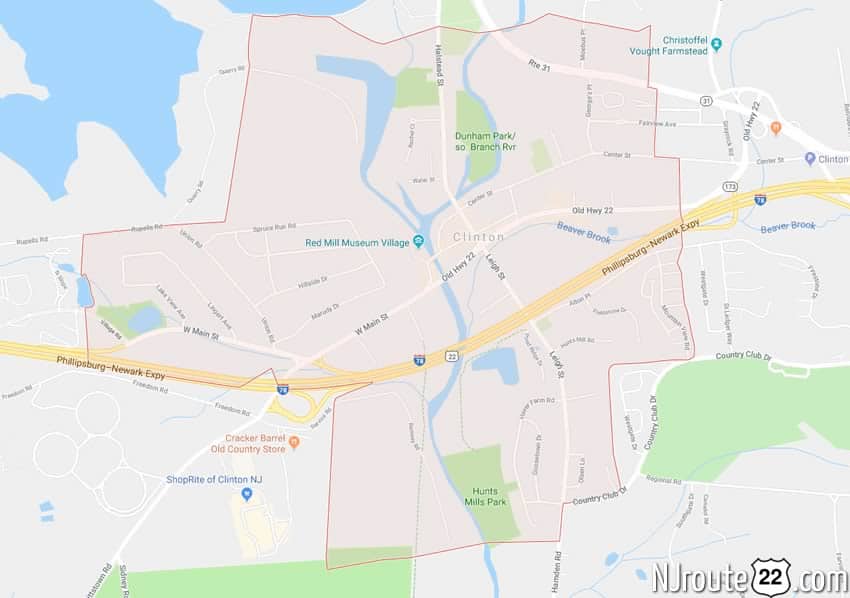