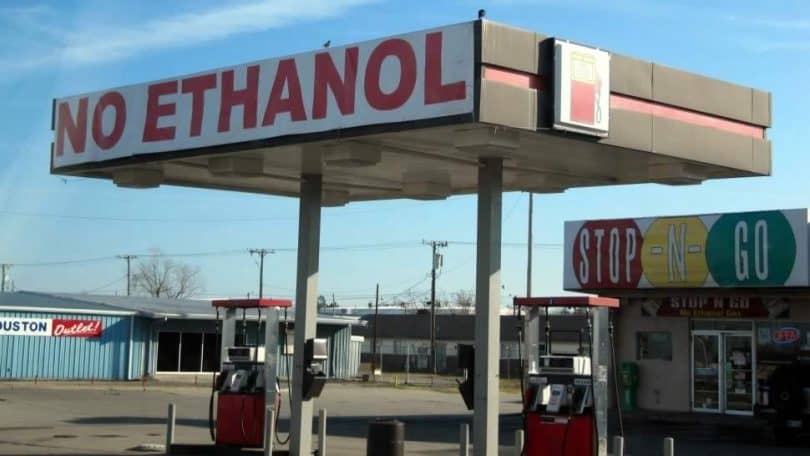 A good portion of residents living along the NJ Route 22 West Zone and NJ Route 22 Central Zone most likely have homes with yards. That means that many do their own landscaping – or at least have one or more gas-powered tools in their garage or shed. This post is to explain the importance of ethanol-free gasoline.

Lawnmowers, chainsaws, trimmers, blowers, tractors. You name it. If you want to give the best fuel for your equipment – you must choose ethanol-free gasoline.

Ethanol in gasoline is bad for everyone

For whatever ludicrous reason – NJ allows up to 10% ethanol in the gas you buy at any gas station in the state. We do not care about the reasons they claim. It’s bad for everything. Perhaps cars can handle the ethanol (short-term) – but home power tools and equipment suffer badly. When gas has ethanol in it – condensation happens even after just a few weeks of non-use. That is one of the main reasons your stuff won’t start – or will run poorly.

Having ethanol in your equipment only makes them fail sooner. Usually, because the rubber seals and fuel lines will degrade and ultimately fail entirely. If you use gas with ethanol – it’s paramount to both put additives in – as well as removing the fuel from the device during periods of extended non-use.

But they don’t tell you that loud and clear. Most people have to learn the hard way – or just become perplexed as to the cause of their equipment malfunctions. It’s costing NJ consumers millions of dollars in unnecessary financial burden. And it seems that most people have dust collecting on their pitch-forks and torches.

At least we still have some options.

Ethanol-free gas in NJ is next to impossible to find

There’s a website you can look up sources of ethanol-free gasoline. It’s called Pure-gas.org.

There aren’t many places in NJ. And even the places that DO have it – usually have the “race car fuel” kind, with an octane of 94 to 100. Costs a ton. Usually over $5 sometimes $10 a gallon. It’s because of the dumb laws in New Jersey. Another reason why no one should ever praise any so-called “lawmaker” in our state.

Our favorite place (and closest to the area covered by NJroute22.com) is Ike’s Airport Garage in Allentown, PA. It’s just off Route 22 on Airport Road.

They sell “low grade” ethanol-free gas. I think it’s 87 octane. Perfect for your power tools. They also have a 91 or 93 “super” ethanol-free version as well. I’d put that in my car from time to time. But be prepared to pay more. When we wrote this – it was about $3.50 a gallon. We normally buy 10 gallons at a time – and it serves our equipment well. The extra buck or so you pay per gallon is worth the long-term assurance that the fuel you add will not cost you hundreds if not thousands later on.

And the most important part of having ethanol-free gasoline – is that it remains stable (and usable) for a very long time. They say a year, but we suspect even longer than that. Crappy NJ gas becomes corrupted after 30 days (just like our politicians!)

So figure out a way to make Ike’s Airport Garage an integral part of your life.

Here is where it is located:

If this post served you well – empower your friends and neighbors by sharing this information. We have “social media” sharing links right under here – or you can just copy and paste the URL and email it around. Or just tell people in person like we did in the old days.

Remember, knowledge is power. Let’s help one another and become stronger!