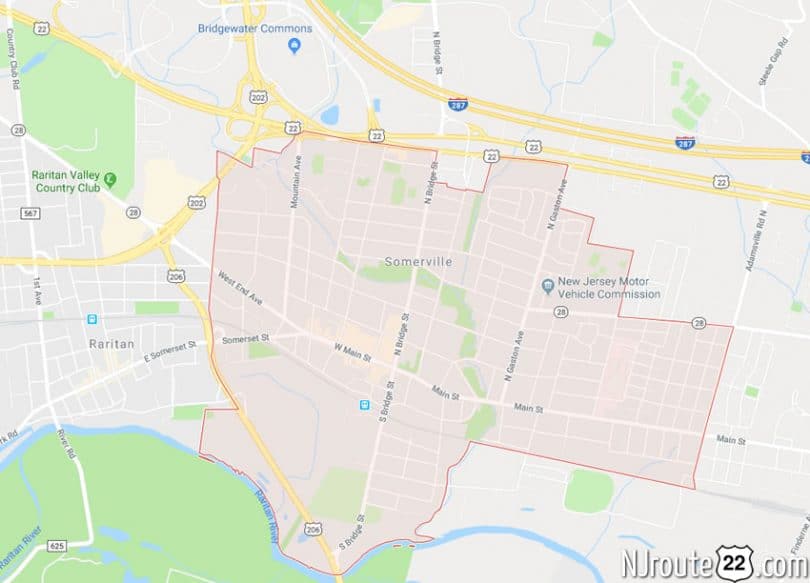 Somerville, NJ only touches the eastbound part of NJ Route 22 for just a few hundred feet – but it’s still part of the “family!”

At a little over two square miles, it’s a fairly densely-populated town, ranking in the top 20% of NJ cities for density.

Route 28, Route 202, and Route 206 also pass through Somerville. But the Somerville Circle – is not within city limits!

An NJ Transit Station (Somerville) is also located near the center of town.

The borough is named for Somerset in England.

Somerville was settled in colonial times primarily by the Dutch who purchased land from the English proprietors of the colony. The Dutch established their church near what is today Somerville and a Dutch Reformed minister or Domine lived at the Old Dutch Parsonage from about 1754. The early village grew up around a church, courthouse and a tavern built at a crossroads shortly after the American Revolution. The name “Somerville” was taken from four brothers of the Somerville family, William, Edward, John and James from Drishane and Castlehaven, County Cork, Ireland, who first founded the town in the 1750s. Somerville was originally a sparsely populated farming community but rapidly grew after the completion of the railroad in the 1840s and development of water power along the Raritan River in the 1850s. Early industry included brick making from the plentiful red clay and shale on which Somerville is built. While much of the borough features distinctive Victorian architecture in several neighborhoods and along its Main Street, other periods are represented. National Register sites in Somerville include the white marble 1909 Somerville Court House and the wooden and stone colonial Wallace House (today a museum) where George Washington spent a winter during the American Revolutionary War. Near the Wallace House is the Old Dutch Parsonage, where Reverend Jacob Rutsen Hardenbergh, a founder and first president of Rutgers University, then called Queens College, lived. Register-listed Victorian structures include the James Harper Smith Estate (privately owned), St. John’s Episcopal Church and rectory, and the Fire Museum (a vintage firehouse). Other notable, register eligible structures are the Victorian train station (privately owned) and the municipal building, the former Robert Mansion.

Originally the center of local commerce, the borough has evolved into a destination for boutique retail and dining. Modern highways today surround and go through Somerville, including U.S. Route 22, U.S. Route 202, U.S. Route 206 and Route 28 and is within 5 miles (8.0 km) of Interstate 287 and Interstate 78, making it an important hub in central New Jersey.

Main Street Somerville maintains most of its historical buildings, although many are now boutique specialty shops and second-hand shops. Somerville has quite a diverse and large selection of restaurants that draw people from the surrounding area. In many ways, Somerville remains Somerset County’s downtown and is the heart of its designated Regional Center. Several of the factories in Somerville were abandoned and replaced with modern office buildings or remodeled as apartments. Somerville today and historically has had an important African American community, a distinguished member of which was Paul Robeson. Another famous Somerville native was famed character actor Lee Van Cleef. One of the founders of modern American Dance, Ruth St. Denis, made her professional debut at Somerset Hall, once a vaudeville theatre and today a local restaurant. The mix of modern amenities and an interesting and diverse past make Main Street, Somerville a unique destination for dining, strolling and visiting.

The shopping center on the west side of the downtown area was demolished and a new shopping center, townhomes and other amenities will be built on the shopping center land and on adjacent land in the former borough landfill to the south. The ground was broken for a new “world class” ShopRite supermarket in March 2011 and opened in November 2011. Borough planners envision a transit village style redevelopment centered around the Somerville train station.

Somerville was hit hard by Hurricane Floyd in September 1999, despite its having been downgraded to a tropical storm by the time it impacted the vicinity. The borough received a record 13.34 inches (339 mm) of rain over three days during the slow-moving storm, causing significant flooding and considerable damage.

Interstate 287 is outside in neighboring Bridgewater Township and is accessible via US Routes 22 and 202/206.

People who were born in, residents of, or otherwise closely associated with Somerville include: 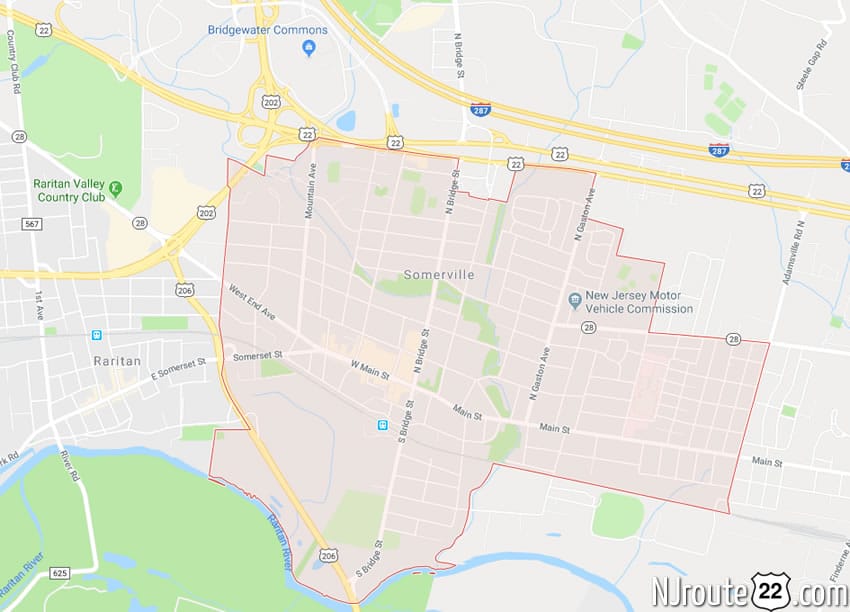