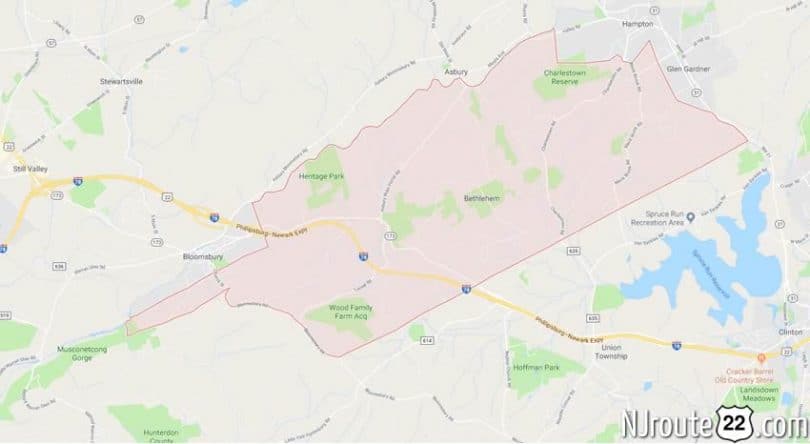 Bethlehem, NJ is also included on NJroute22.com. While the main road that cuts through the township is Route 78, it’s still technically Route 22. As well as the “old Route 22,” which is now referred to as Route 173.

Bethlehem was first mentioned in official records dating back to 1730, though details of its formation are uncertain. Bethlehem was incorporated as one of New Jersey’s initial 104 townships by an act of the New Jersey Legislature on February 21, 1798. Portions of the township were taken to form Kingwood Township (1749, date uncertain), Alexandria Township (March 5, 1765), Union Township (February 17, 1853), Junction borough (February 20, 1895, now known as Hampton borough), Bloomsbury (March 30, 1905) and Glen Gardner (March 26, 1919).

The township was named for the city of Bethlehem.

The landscape is mainly rural in nature, featuring farms and forests, scattered with newer housing developments and older farm homes.

Various animals are native to central-western New Jersey, including red fox (vulpes vulpes), black bear, groundhogs, wild turkeys, deer, squirrels, chipmunks, a variety of birds, and a plethora of insects and vegetation. There are also some fish in the streams of the county.

Black bears are the largest land mammals in New Jersey and are known to be most abundant in the northern-western regions of the state, including Bethlehem Township.

There were 1,344 households, of which 41.1% had children under the age of 18 living with them, 77.0% were married couples living together, 4.8% had a female householder with no husband present, and 14.6% were non-families. 11.9% of all households were made up of individuals, and 5.0% had someone living alone who was 65 years of age or older. The average household size was 2.96 and the average family size was 3.22.

Bethlehem Township is well-connected to major metropolitan areas and cities (such as the Lehigh Valley in Pennsylvania and New York City) via Interstate 78 / U.S. 22 and Route 173. While I-78/US 22 pass through without any interchanges, the nearest exit is just outside the township in bordering Bloomsbury (Exit 7) and Union Township (Exit 11).

Public transportation is limited to The LINK, a public bus service which services Hunterdon County. Fares range from about $2.00 to $10.00. Funding for the operation of the Hunterdon County LINK System is provided by Hunterdon County, New Jersey Transit and the Federal Transit Administration.

People who were born in, residents of, or otherwise closely associated with Bethlehem Township include: 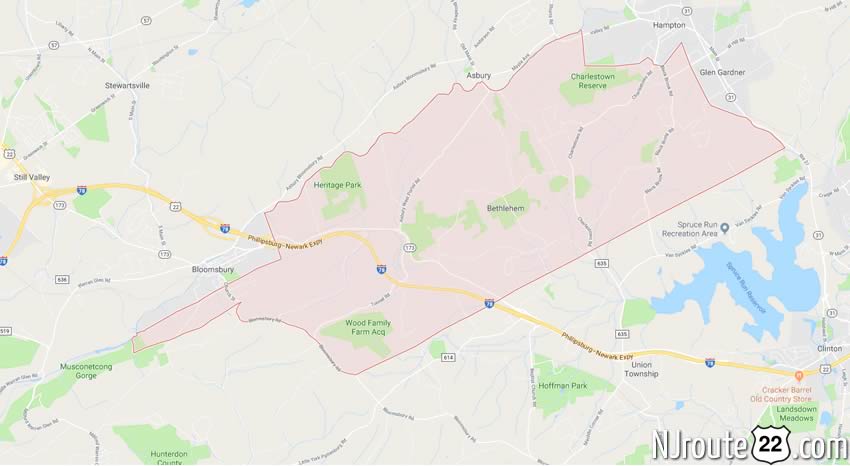