East to west, New Jersey covers the whole range of living environments. From the bustling immediate NYC area, the cookie-cutter McMansion suburbs, and very rural sections that have both forest-like plushness, to vast farmlands to the west.

NJ is at the top of densely-populated states – and we can imagine how true city living is collectively crushing the souls of many people who chose that lifestyle.

Interestingly – we’re hearing that there is quite a bit of an exodus from the New York City area out towards the more peaceful sections of Jersey. Part of it has to do with the dumb “crisis,” and others suspect that in today’s age – a lot more people are getting sick of how cities are literally starting to fall apart. Who knows. But below is a great piece about how cities may not be healthy for good people.

City living is a crucial element of the modern lifestyle. Estimates show that by 2050, 68% of the population in the world will be living in urban zones. Right now, this figure is about 55%.

There are certainly many opportunities and advantages that arise from living in the city. More career prospects, people to meet, things to do in your free time… But is modern city living really good for us?

Countless studies demonstrate the adverse effects of the urban environment on human mental and physical health. Pollution, lack of greenery, constant noise, and hectic lifestyle do their catastrophic job gradually but efficiently.

Now, imagine someone whose senses are far more acute than an average person’s. How would all these things make them feel? If city living is toxic for most people to some extent, then it’s totally poisonous for those with highly sensitive brains.

Why Empaths and Highly Sensitive People Suffer in the Cities

Every day, we are surrounded by numerous things we are not even aware of. After years of living in the city, we cease to notice street noises, the stiffness of air, and the overwhelming prevalence of artificial materials over natural ones.

Only when you get back to nature, you see the striking difference between your wellbeing in the urban environment and the natural one.

I recently spent a weekend in a forest retreat. Just three nights in natural surroundings did wonders. I suddenly began to feel full of energy and inspiration, the quality of my sleep improved dramatically, and my dreams became unimaginably vivid.

This is when I realized how draining, devastating, and toxic city living is for a highly sensitive person or an empath. If you belong to one of these two categories, let’s look at specific ways the city is making you dull, anxious, and tired for no reason.

It’s worth noting that the below-described phenomena affect all people whether they are aware of it or not, but those with highly sensitive brains and empathic nature are simply more susceptible to them.

1. The ever-present and never-ending noise

The first thing you notice when you go to the countryside is the quiet. You only hear nature’s sounds, which are pleasing to the ear and the soul, unlike the background noise of the city. We have become so accustomed to this continuous mix of car sounds, human voices, and other chaotic noises that we don’t even pay attention to it anymore.

Now, it’s not an easy task if you live in an urban area. You need to have pretty good insolation at home in order to cut all those street noises.

Sensitive people know that it’s not just noise that is draining their energy. It’s also the rhythm of the big city with busy people rushing through the streets all day long.

It creates an atmosphere of endless tension and anxiety, and suddenly, you find yourself feeling exhausted and anxious for no obvious reason. This is because as an empath or an HSP, you pick up too many stimuli from the surrounding environment, including other people’s emotional states.

So their anxiety becomes your own, even when you have no reason to feel stressed. It’s no coincidence that many studies point out a higher prevalence of mental disorders in urban areas.

3. Lack of greenery and natural materials

Another neglected effect of city living is the absence of contact with nature. Well, it depends on the city you live in – some urban centers have pretty much greenery and nice parks. But the only thing is clear – with the growing urbanization, humans are distancing themselves from natural settings.

In the realm of concrete and asphalt, it’s way too easy to lose any connection with nature. We also rarely consider the impact of the materials used in modern construction.

Yes, these materials are very convenient, but they are totally lifeless. Living in a modern multi-story building is a very different experience from living in a wooden or natural stone house.

Every empath and highly sensitive person knows how refreshing contact with nature is. It feels like home, and you finally know that you belong somewhere, in contrast to the devastating feeling of being disconnected from everyone in the busy city.

Spending some time in nature helps us recharge and feel whole again. Sometimes, just a couple of days camping can prove more revitalizing than a month in the fanciest hotel. 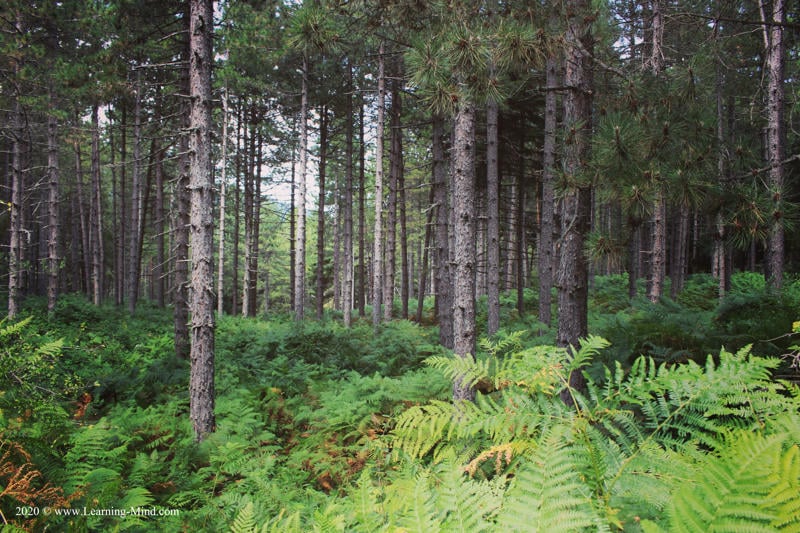 For this reason, most empaths and HSPs are uninterested in luxury lifestyles and are more likely to dream about a simple life somewhere in the countryside.

In fact, studies confirm how important it is for humans to stay in touch with nature. And yet, it’s so difficult to maintain this connection in the city.

If you are an empath, you know that spending just half an hour in a crowded place is overwhelming. It’s because you are sensitive to other people’s energies and emotions even when you are not interacting with them but are simply around them.

Now, imagine a busy city center in an overpopulated urban area, and you will get an empath’s definition of hell. Crowds of anxious, stressed, angry people, rushing to the work they hate, feeling annoyed with each other, and frustrated with life…

In the city, the very presence of too many people around you can disturb your peace of mind.

How many devices are we constantly surrounded with in the city (even when we are not the ones using them)? Today, you can hardly find a person who lives without a smartphone, a computer, and Wi-Fi. All those fruits of technological advances create an invisible field of electromagnetic radiation.

The effects of electromagnetic radiation on human health remain a controversial topic in the scientific literature. However, some studies show that exposure to low-frequency electromagnetic fields negatively affects human nerve functions, leading to sleep and mood disturbances.

Remember, we are talking about people with heightened sensitivity to all kinds of stimuli from the environment, including different types of pollution and radiation. It comes to no surprise that such a person is more susceptible to the potential negative impact of electromagnetic fields.

Are You an Empath or a Highly Sensitive Person Trapped in the City?

Maybe you often feel exhausted without a reason and wonder why. Maybe you lack energy and willingness to do anything, feeling sleepy and unamused all day long. Your inspiration has run dry, and you don’t know what to do.

It could be that all these symptoms are the unfortunate consequences of city living. No matter how far technological advances go, the human is a part of nature and will always be. Our innermost beings desperately crave contact with the natural environment, and the more we distance ourselves from it, the less happy and whole we feel.