As people travel this Christmas season – we thought it’d be good to talk about fear, statistics, and other nonsense peddled by both the government and lame-stream media.

Each year, some “statistics” are published by the NJ Government. Whether they’re accurate or not – is an entirely different subject (i.e., the margin of error is probably high). And many publications love making a scary story about it (i.e., “click-bait.”)

So a list was published regarding “dangerous” roads. Oooh. Scary, right?

It ranked the Top 12 roads in New Jersey – according to “crashes” reported in 2018. Here is the list in reverse order:

But these “numbers” are meaningless without context. The most obvious to a statistician are – length of the road, number of cars (volume), and number of miles driven.

Note: Other important “statistics” cannot be measured accurately. Such as educational level, financial, immigration status, and other intangible factors of drivers that undoubtedly play a role in the coexistence of drivers.

But it was important to note that many accidents / crashes noticeably took place in dense areas of the state. Volume increases the likelihood. You don’t need government stats to know if one area is riskier than another. All you need is your two eyes.

The roads are not as “dangerous” if you look at other stats!

If you take another vital statistic – which is “crash rates per 100 million vehicle miles traveled” for each road – the rankings get mixed up considerably:

* The lowest crashes per mile are not listed – because of the obfuscation of data from the “authorities.” But both the two longest highways in NJ (with the highest volume) – had the least overall (per vehicle miles traveled).

It should also be noted – that the “average” crash rate for all NJ highways is 4.13 crashes per 100 million vehicle miles traveled.

And you can see that much of this data is muddied – because the roads travel through multiple municipalities and demographic areas.

But anyone with half a brain can determine that places (such as Union County, NJ) – are horrible places to drive. Whether it’s the “type” of people that frequent and live in those areas – or just “population density” isn’t an exact science. But some reading between the lines in addition to observational skills will lead you to sensible conclusions.

Route 78 is our favorite road

Every person complains about the road they travel on – especially if they use them for commuting. Repetition of bad memories can lead to false impressions.

But we travel a lot here. All major roads. New Jersey for life.

And if I had to rank the “Best” road/highway overall – it would be Route 78. Even though people get scared because of big trucks – we don’t care. The road is nice. Spacious. Non-commercial.

Our second-favorite road is probably Route 95 (i.e., Turnpike). We have never had an issue on that road, although it sucks near the Meadowlands between the tunnels.

In terms of least favorites (besides the whole Route 1/9 no-brainer), we’re not fond of the Garden State Parkway (central to north). The lanes are just too narrow in many spots. Central to the south (after the Raritan bridge down to shore areas, AC, etc.) it’s fine.

Route 80 also stinks from the GWB out to about maybe Lincoln Park. Horrible drivers consistently.

The rest of the roads in NJ are perfectly manageable – if you pay attention and GET OFF YOUR PHONES! 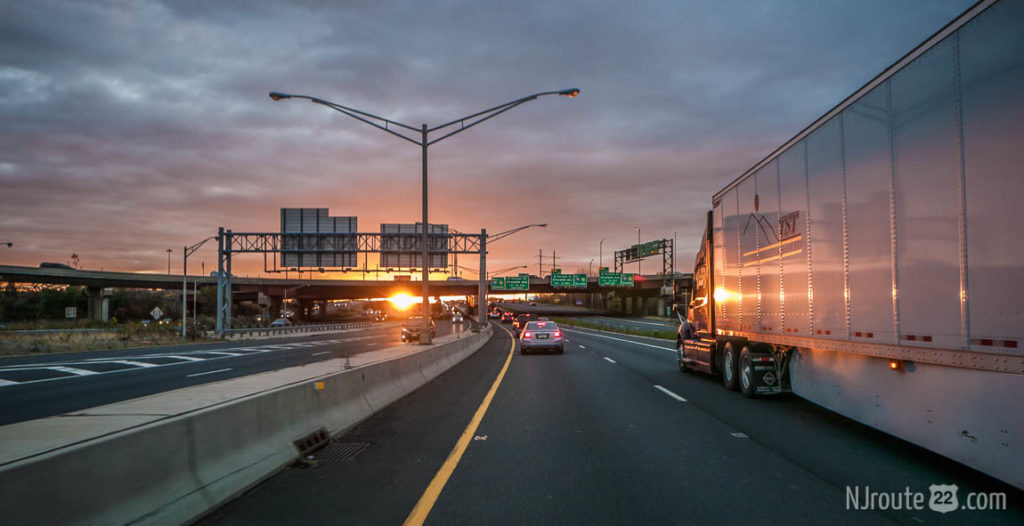 In the end – statistics do NOT matter – YOU do!

We’ve driven on all these roads – and have never had a problem.

Sure, some NJ roads are more “challenging,” and may require some increased attention. Just drive on any major highway in the five boroughs of Manhattan to know what real “danger” is.

Statistics do not make a road “dangerous” as media publications love to scare people. Stats are just historic points in time. NOT what will happen in the future.

In fact – if you really want to think about it – being alive is “dangerous.” Bad things can happen at any point. A tree could fall on you. Roads can collapse. Planes crash. There are dangers everywhere you look – like even a jail cell that is suicide-proof!

And yes – bad luck happens, even to the safest drivers who have the highest levels of awareness! That is life. Luck of the draw.

Whatever you do – NEVER let “scary” statistics of danger and gloom negatively affect you. If anything – use them for your advantage – and ALWAYS PAY ATTENTION!