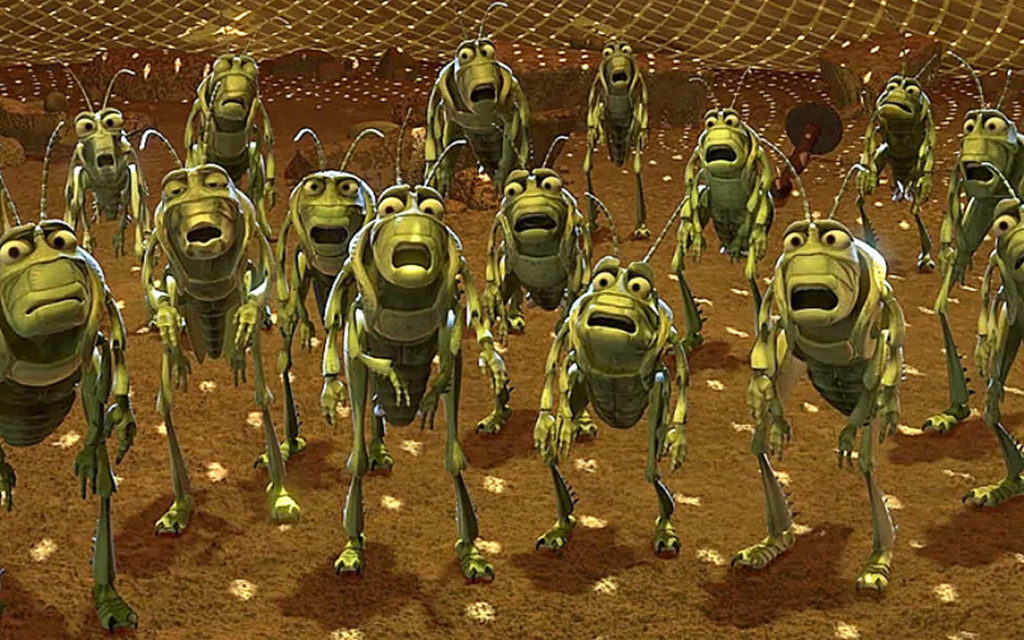 Aesop’s, The Ant and the Grasshopper

In a field one summer’s day, a Grasshopper was hopping about, chirping and singing to its heart’s content. An Ant passed by, bearing along with great toil an ear of corn he was taking to the nest.

“Why not come and chat with me,” said the Grasshopper, “instead of toiling and moiling in that way?”

“I am helping to lay up food for the winter,” said the Ant, “and recommend you to do the same.”

“Why to bother about winter?” said the Grasshopper; we have got plenty of food at present.” But the Ant went on its way and continued its toil.

When the winter came the Grasshopper found itself dying of hunger, while it saw the ants distributing, every day, corn and grain from the stores they had collected in the summer.

Then the Grasshopper knew…

It is best to prepare for the days of necessity.

Some of the Unprepared Will Blame You

Some of the unprepared grasshoppers align with the victim class. Not all, but enough. And victims need someone to blame. Because it’s not their fault, right? They’ll blame you for “hoarding”, because they’ve not thought ahead. Really, they should blame themselves instead.

When the SHTF, as in this unfolding COVID-19 Coronavirus that originated and spread from China, many people have been going through phases…

Denial. It won’t affect me. It’s not that bad. It won’t happen here. Normalcy bias. Not even thinking about preparing for “it” – because that’s just stupid.

Realization. It’s apparently and evidently getting worse or closer. But it’s still not going to be a big problem – because it’s not “here”, in “my” area of operation. I can always go to the store to get what I need. Normalcy bias still grips the mind.

Panic. Suddenly there’s an “oh $hit” moment, or series of moments leading to panic. Must. Buy. Toilet Paper. Now. (Apparently, food was an after-thought, though now getting hit hard).

Anger. The ensuing panic has created shortages and unavailability of many items. The unprepared become angry because they can’t get what they want or need – or at least in sufficient quantity. Must. Blame. Someone. (and/or take from someone?)(redistribution for the good of the people?)

The Longer You’re Prepared For – The More Selfish You Are?

I’ve been reading various media/comments implying how selfish it is to be stocked up beyond a time frame which seems reasonable. And what exactly is reasonable? Well, that depends on the person making the accusation. if you have more than they do, maybe that’s too much.

Let’s say the panicked grasshopper was only able to procure one month of food and supplies. If their neighbor has 3 months stored ahead, well, that’s just not fair.

If you have acquired (over time) 6 months, or 1 year or more — GASP! You must be a HOARDER! That’s so not fair. So selfish. That stuff of yours needs to be redistributed to those who “need” it!

Of course, as you know, being preparedness-minded, it’s perfectly sensible and logical to build up a store of reserves just in case. However there are those (more than you might realize) who first think you’re nuts for doing that, and next will accuse you of hoarding and want your stuff if and when the SHTF!

More and more people are self-isolating at home. Many states (including mine) have “orders” to stay at home except for essentials like groceries and medicine, or if you work in an “essential” field.

People are getting stressed out. Many are or will be losing their jobs. Many businesses will fold. How are people going to pay their bills if they lose their job or unemployment doesn’t pay as much? More stress.

People are going to go “nuts” at home after a while. Especially those who live in the city, an apartment, no real land or yard to get into. I can’t even imagine… More increasingly angry people?

When Desperate People Begin To Do Desperate Things

Humans have an instinct for survival. Be careful when others around you are getting desperate. If you couple that with the “bad element” of the human population, it’s a recipe for bad things to come.

We are presently in the early stages of this pandemic situation. However, we’re rapidly moving up the steeper portion of the hyperbolic curve.

Isolation or stay at home orders has just recently begun. I don’t know how long this is going to last. There is an obvious conflict between crushing the economy (it already is crushed), versus encouraging people back to work. Too soon, and this virus continues to flare. Which it may keep on doing anyway because not everyone is isolating.

Here in NH, the governor said May 4. That will be a total of 5 weeks. Every state and region is setting its own guidelines. Will this go longer than that? Personally I believe that it will. Or it may turn into a “round 2” after they release the public to engage once again. Then isolation all over again. I just don’t know.

What I Do Know Is This…

Most everyone was not prepared for this pandemic. Panic buying ensued. Many were able to stock up to the extent they felt okay about it. However, my concern is that it wasn’t enough. And that most people continue to rely on grocery store supply availability throughout the period of this pandemic.

Will supply chains keep up or be unaffected by this virus in their manufacturing/distribution channels? I don’t know the extent. But for many of you, you’ve already seen the problems in your own grocery stores beginning a few weeks ago. Could it get worse? Probably…

Protect Yourself, Your Home

Listen, I know I’m mostly speaking to the choir here. However, I’ll say it anyway. Think about your personal security during these increasingly potentially dangerous and unprecedented times.

Of course, we all hope that this virus situation burns itself out soon. Hey, maybe it will. That would be great. However, I just don’t think that’s going to be the case. My gut tells me that we’re in this for longer than most may believe. And as a result, there’s going to be more and more problems. Our world has changed.

Gun and ammo sales are through the roof. Ammo shortages are everywhere. People ARE thinking about personal and home security. It’s evident.

Here’s a thought during these unprecedented times… For those who are gun owners but typically do not carry, or carry often, for now, you might consider carrying all the time. Even at home. Make it a habit?

I know it’s not for everyone. That’s okay. Really, chances are that you’ll never ever need such a tool during most ordinary times. However, there’s always maybe. And as this thing gets worse and worse, I do believe that “maybe” becomes increasingly concerning.

Bad people may want your stuff. Do you think the bad element got prepared? I doubt it. They might start coming out of the woodwork like cockroaches.
A fitting comment today from “Modern Throwback” reads as follows:

This coming week, our guard goes up. We are living in very unusual and unprecedented times — we need to be guarded at all times now. Nothing odd has taken place here. Yet. But we want no surprises.

There’s a whole bunch of humans out-there and it won’t be long before they’re hungry, off meds, needing a ‘fix’, angry, or worse. I sure don’t want to meet up with any of them. So it’s time to activate a more guarded position at all times.

I don’t think the masses have a good definition of what their personal futures hold for them. They’re doing what they’re told for now, but obedience changes as quickly as a Facebook comment gets posted. Flash mobs meet to harm and destroy.

For those folks who are law-abiding citizens, how much can they tolerate before the strain pushes them over the edge? No one really knows what will happen from one day to another. Add money or family burdens in and people will react, and often it isn’t in a play-nice way.

People are still relatively ‘well behaved’, but I suspect it won’t be long before full-on crazy starts to take place and crime increases. Keep your eyes open folks.

If something looks out of the ordinary to you, it is.

Well, these are just thoughts during a Sunday afternoon of stay-at-home “orders” as I continue locking this place down. Devoting more time to security and Level 4 preparedness planning, just in case.