It doesn’t matter if you’re health conscious or not – I recommend that everyone own a copy of Sugar Blues written by William Dufty.

For those who are struggling with their weight, this book alone should empower you enough to never look at sugar, or sugar-laden things the same way again. Goes a long way towards helping avoid those things forever.

And for those who “don’t care” what they eat will be intrigued by what the never knew about the sugar industry – and it’s extensive history on planet earth. You’d be surprised, and will never quite look at sugar the same way again (and might wonder why you were never taught any of it!)

Written over four decades ago – this book is still entirely relevant and could have easily been written today. Except it would be missing the new ways they have of poisoning us – like HFCS, and other new words for disguising sugar.

Sugar is a poison for all intents and purposes, and this book was prophetic. Sugar should be considered a dangerous drug. The worst thing about it is that it’s addictive and “tasty,” and the negative effects take a long time to reveal themselves. And think about all the people that profit along the way to your ultimate painful demise.

As you shop the supermarkets along the Route 22 area, do you ever ask yourself why you can buy like a five pound bag of sugar for just pocket change? Who benefits?

Below is an interesting financial look at sugar as well… does something seem strange?

In the United States, fewer than 4,500 farm businesses produce sugar. Yet they cost taxpayers up to $4 billion a year in subsidies.

The U.S. sugar program is a Stalinist-style supply control initiative that limits imports through quotas and domestic production through what are called marketing allotments. 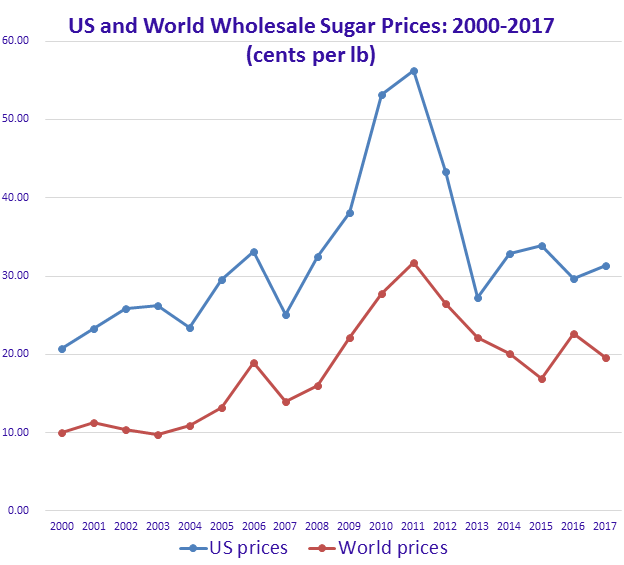 Only the shrinking group of those raising sugar beets and sugar cane benefit from this program, receiving an average of over $700,000 per grower each year, according to an analysis by the American Enterprise Institute.

The program, which dates back to the 1981 farm bill, generates over $1 billion a year in profits for growers, or an average of more than $200,000 per grower, according to the AEI report. One Florida family that plays a dominant rule in cane production is estimated to benefit to the tune of between $150 million and $200 million a year.

No wonder the U.S. Sugar Alliance, the major lobbying arm for U.S. sugar growers, is extremely well funded and uses its resources to maintain a highly protectionist, trade-distorting program that costs a family of four between about $44 and nearly $50 a year in subsidies.

Finally, there are other agricultural and environmental costs to these subsidies. Over half of U.S. sugar production comes from sugar beets, which are overwhelmingly raised on highly productive irrigated land that can be used to produce many other crops. The rest consists of sugar cane produced in high rain areas like the Mississippi delta region and Florida using very substantial amounts of nitrogen and other fertilizers that, because of runoff, have had severe impacts on water quality and the natural ecology of those regions.

The U.S. has been protecting its sugar industry in some form since 1789.

With the House and Senate each debating their own farm bills, there has never been a better moment to reform this crony capitalist program.

However, senators will hopefully have the opportunity to incorporate common-sense reforms to the sugar program, such as the bipartisan “Sugar Policy Modernization Act” from Senators Jeanne Shaheen (D-N.H.) and Pat Toomey (R-Pa.) on the floor of the Senate in the coming weeks. A companion bill offered by Representative Virginia Fox (R-N.C.) also is widely supported on a bipartisan basis and deserves further consideration if and when farm bill legislation is reconsidered on the floor of the House.

Other countries do indulge in similar follies. Canadian provinces, for example, limit the domestic production of milk to raise prices paid by Canadian consumers to benefit their dairy farmers. And the Canadian government imposes prohibitively high tariffs on imports of dairy products from the United States to protect those high prices (at rates as much as 270%). But that fact that other countries have economically inefficient policies is no reason for the United States to follow suit.

The U.S. has been protecting its sugar industry in some form since 1789. It is time to stop padding the pockets of the sugar-producing industry to the tune of $3 billion to $4 billion a year to the detriment of U.S. consumers, Florida property owners whose asset values have been affected by downstream pollution, and workers in the food-processing sector who have lost their jobs.