Are they masks – or face diapers?

An online author friend of ours uses a phrase for this whole face-covering ritual everyone is (almost) forced to partake in. It’s called “diapering” or just diapers.

It’s brilliant actually – because of the infant-like authority of how controllers are treating the citizenry. And even worse – how at least 80% of what we see along Route 22 in New Jersey – is compliance by the obedient sheep who know no better.

In the article below – he explains in detail why he often reports about the diapers.

Why I Diaper Report

Some of you may wonder why I am so dogged about not-Diapering. More precisely, dogged about Diapering, generally. What just happened in Melbourne, Australia may help explain.

Armed government thugs – accoutered in Diapers – descended upon the home of James Bartolo – a former soldier who questions Diapering and the “locking down” of the entire population over proved to be false assertions about a sickness that doesn’t kill 99.6 percent of the population.

They smashed in his door and carted him off to a cage for his questioning – and his advocacy of resistance to Sickness Psychosis. Not with violence. Bartolo simply urged people to go outside and live – peacefully – as they once did in Australia, before it became a crime to not abide by the decrees of Gesundheitsfuhrers regarding a sickness that poses no threat (well, no threat of death) to 99.6 percent of the population – most of whom don’t even get the sniffles.

There is no legitimate reason to “lock down” anyone who isn’t in prison – and making it a crime for people who aren’t prisoners to go outside makes them prisoners – which is what Bartolo objected to and urged others to object to on a social media page.

This is now a crime in Australia. Not a ticket crime, either. A full-boogie Hut! Hut! Hut! offense that prompts the same SWAT-style response previously reserved for violent felons.

The violent felons now being the ones with badges and guns – and Diapers. 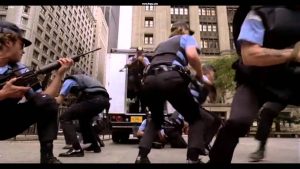 This is the reality in Australia – where perhaps 750 or so people out of the entire population have supposedly (keep in mind the numbers touted are hugely suspicious) been felled by the WuFlu . . . out of a population of 24.9 million.

It will soon be the actuality here, if this psychosis isn’t treated.

Most especially to the visual of fear – the Face Diaper – which is essential to the maintenance of submission to the fear. 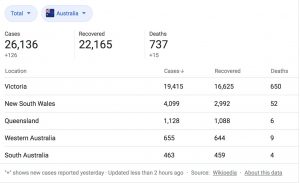 People will become terrified to not wear the Diaper anywhere and become so beaten down by the wearing of it that they will be glad to get the Needle – which will be dangled as their reward for Diapering. The Needle will follow on the heels of the Diaper in the way that accepting mandatory seatbelts in cars led to accepting mandatory enforcement of seatbelt wearing in cars.

Diapering – or not – is the question of our time and perhaps for a generation to come. If we give in to Diapering by tolerating Diapering our children and perhaps theirs will be Needled, as well as ourselves.

There will be no life left for the Undiapered – who will be locked out of everything and locked-down, too.

If you do not want to live like that – the way Australians like James Bartolo are already living – then take off the damned Diaper and throw it in the trash. Stop giving in to the pressure. Stop letting yourself be guilted or browbeaten into submitting to other people’s sickness.

Take a stand, now  – while you still can do it without being SWATTED for doing it.

They are playing for keeps. We are idiots and poltroons who will deserve the contempt of the future if we do not.