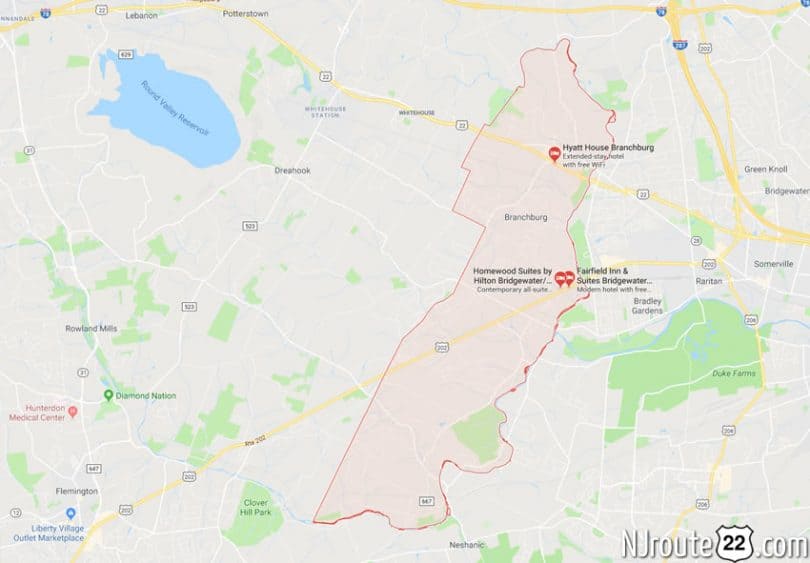 Branchburg as a town – is a fairly interesting mix. It’s been called “not quite rural, not quite suburban, but a decidedly middle-class town.”

NJ Route 22 only pierces through about a couple miles – but like Readington – it covers a decent amount of north/south space, including a substantial portion of Route 202.

The area of today’s Branchburg has a history antedating the American Revolutionary War. The township was incorporated by an act of the New Jersey Legislature on April 5, 1845, from portions of Bridgewater Township. The township is named for its location at a point where branches of the Raritan River merge.

The land that is now known as Branchburg Township was originally inhabited by the Raritans, a tribe of the Lenni Lenape Native Americans. By 1686 most of the land was purchased from the Lenape by the Lords Proprietors of East Jersey, who sold the land in small parcels to numerous settlers, mostly of Dutch or English extraction. With the 1688 redrawing of the boundary between East and West Jersey, the Branchburg region was split between Essex County to the north and the newly formed Somerset County to the south. With Somerset’s acquisition of territory from Essex and Middlesex Counties in 1741, Branchburg lay entirely within Somerset County.

Bridgewater Township was chartered in 1749. The residents of the part of Bridgewater west of the Raritan River petitioned the New Jersey Legislature for incorporation as a separate township, which was granted by an act dated April 5, 1845. The first town meeting was held April 14, 1845, in White Oak Tavern, a stagecoach stop and local meeting place along the Old York Road.

The township is bordered on the west by Readington Township in Hunterdon County; on the north by Bedminster Township and on the south by Bridgewater Township and Hillsborough Township.

There were 5,271 households, of which 38.2% had children under the age of 18 living with them, 67.6% were married couples living together, 6.5% had a female householder with no husband present, and 23.5% were non-families. 18.8% of all households were made up of individuals, and 6.2% had someone living alone who was 65 years of age or older. The average household size was 2.74 and the average family size was 3.17.

Branchburg Township is the home to the 31 Tannery Project which serves as the corporate headquarters for Ferreira Construction, the Ferreira Group, and Noveda Technologies. The 42,000-square-foot (3,900 m) office and shop building was constructed in 2006 and is the 1st building in the state of New Jersey to meet New Jersey’s Executive Order 54. The building is also the first Net Zero electric commercial building in the United States.

Branchburg is home to the 2012 14U Babe Ruth World Series Championship baseball team, the first from the state since 1989. The underdog Bulldogs, consisting of players drawn from a tryout pool totaling only 16 players, competed and won against teams drawn from tryout pools as large as 500 players.

The Branchburg Police Department, under the direction of Chief David Young, was established on June 16, 1980. The Department currently has 26 full-time sworn officers, two civilian employees, seven crossing guards, and 13 Emergency Management volunteers. The Department has specialized units of officers who have taken on duties in addition to their patrol or detective work. These include the Detective Bureau, Juvenile Officer, School Resources, Traffic Safety, Community Policing, Services, Bike Patrol, First-Aid, Explorers program and Emergency Management.

A clerk called officers about a suspicious person at the Quick Chek store at 1296 Easton Turnpike in Branchburg on January 26, 2010. Officers arrested Lloyd Woodson, and found in his possession and in his motel room a large weapons cache that included illegal weapons and ammunition, a detailed map of Fort Drum, and a traditional red-and-white Middle Eastern headdress. He was charged on multiple state and federal weapons charges. The three officers who responded to the call received an Exceptional Duty Award for their actions.

The Branchburg Township School District serves public school students in pre-Kindergarten through eighth grade. As of the 2011-12 school year, the district’s three schools had an enrollment of 1,707 students and 151.0 classroom teachers (on an FTE basis), for a student–teacher ratio of 11.30:1. Schools in the district (with 2011-12 enrollment data from the National Center for Education Statistics) are: Whiton Elementary School (728 students; in grades PreK-3), Stony Brook School (380; 4–5) Branchburg Central Middle School (599; 6–8).

The public secondary school serving Branchburg for ninth through twelfth grades is Somerville High School, which students attend as part of a sending/receiving relationship with the Somerville Public Schools.

Midland School is a non-profit special education school serving the individual social, emotional, academic and career needs of children with developmental disabilities. The school serves 245 students, ranging in age from 5 to 21 years old, from central and northern New Jersey.

Branchburg Township is the home of the main campus of Raritan Valley Community College.

Branchburg Township is centrally located with access to major roadways and highways. U.S. Route 202 and U.S. Route 22 travel through the township with easy passage to Interstate 78, Interstate 287 and Route 206, enabling residents to travel to New York City and Philadelphia within one hour.

New Jersey Transit train service between Clinton, New Jersey and New York City is available at the North Branch station (located on Station Road), which offers limited daily service and no weekend trains. The Raritan Valley Line has weekly service from North Branch Station to Newark Penn Station, where connections can be made to Pennsylvania Station in Midtown Manhattan.

New Jersey Transit offers bus service to and from Newark on the 65 line with local service on the 884 route.

Trans-Bridge Lines offers bus service between New Hope, Pennsylvania and New York City, with a stop at the Municipal Park-and-Ride facility on Route 202 North on a daily basis, with westbound service on the Doylestown route to Bethlehem, Pennsylvania and eastbound to Newark Liberty International Airport and the Port Authority Bus Terminal in Midtown Manhattan.

Transport of New Jersey bus service between New York City and Allentown, Pennsylvania is available on a daily basis.

People who were born in, residents of, or otherwise closely associated with Branchburg include: 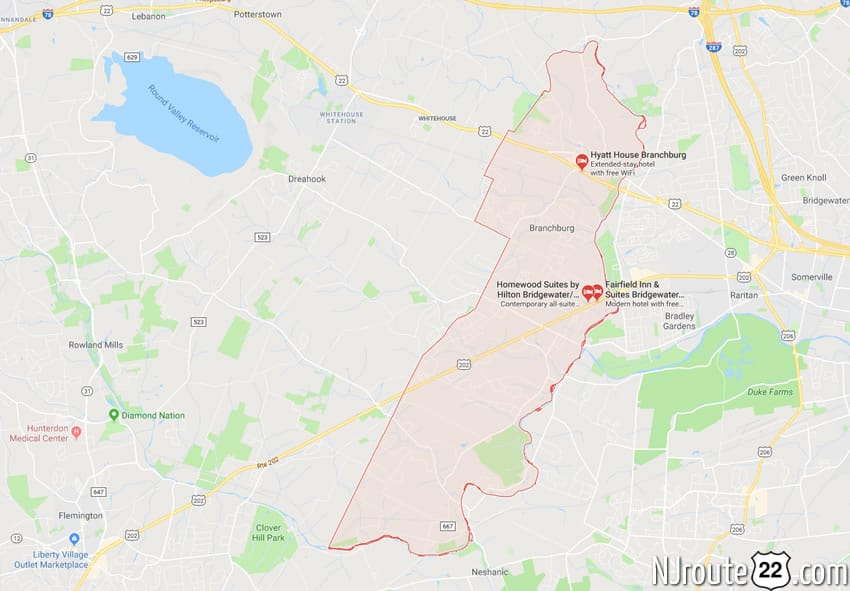